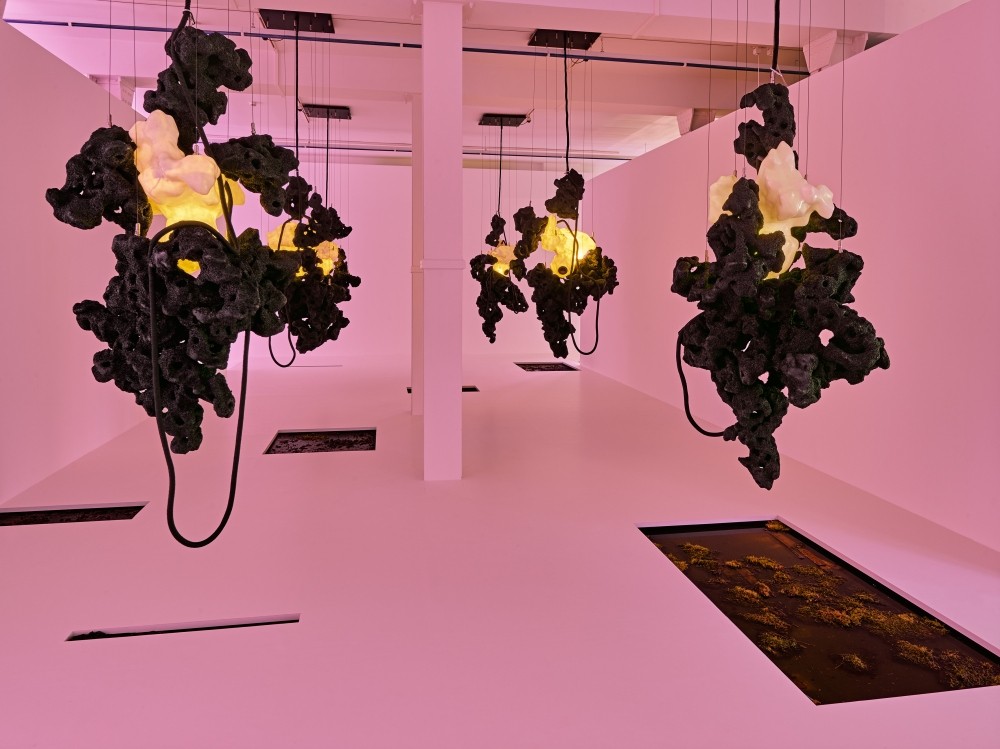 Since the beginning of the 2000s, Loris Gréaud has pursued an atypical path in the field of contemporary art. His work prioritises the idea of the ‘project’. Using this temporally limited concept as a frame for his practice enables the artist to intervene with the given conditions of space and time. Systematically blurring and erasing the limits and borders between fiction and reality, Gréaud's projects create fluid, challenging and otherworldly experiences.

Gréaud's first solo exhibition LADI ROGEURS with Galerie Max Hetzler in Paris in the beginning of this year was conceived as a three-dimensional sketch, encompassing the entire gallery space. In the spirit of the cinematic cross-fade principle, the show in Berlin is a continuation of Paris, reconfiguring the gallery space while drawing from the codes of a still life.

Tinted in a purple, diffuse light, the space is interrupted by organically formed sculptures, Spores, hanging from the ceiling, which spread the sound frequencies of dying stars into the surrounding space. Openings in the gallery floor, filled with mud, sand rust, liquids and waste collected at the original shooting site near Tallinn of Russian filmmaker Andrei Tarkovsky's science fiction masterpiece Stalker (1979) pick up the film's exceptional sentiment. And MACHINE, a tree-like sculpture transforms into an autonomous entity, seemingly moving its limbs beyond any control. Thus, creating a landscape that seems to emerge from another world – a synthetic, supernatural, and disruptively unreal sphere – the installation offers a vision of a contemporary form of vanitas.

The two solo exhibitions of Loris Gréaud at Galerie Max Hetzler introduce the last part of the trilogy initially started in 2008 with Cellar Door (2008-2011) and continued with The Unplayed Notes (2012-2017).

At the same time, Galerie Max Hetzler presents a solo exhibition with new works by Thomas Struth at Bleibtreustraße 45 and the gallery's temporary exhibition space at Kurfürstendamm 213.

Loris Gréaud (*1979, Eaubonne) lives and works in Eaubonne in the suburbs of Paris. Gréaud’s projects have given rise to important solo exhibitions. He was the first artist to use the entire space of the Palais de Tokyo in Paris with his project Cellar Door (2008-2011), which was further developed at the Institute of Contemporary Art, London, Kunsthalle Wien, Vienna, Kunsthalle St. Gallen and at La Conservera, Murcia. In 2013, a double exhibition of his acclaimed project [I] was held at the Louvre and the Centre Pompidou in Paris. Gréaud took over the Dallas Contemporary in 2015 with his project The Unplayed Notes Museum. In 2016, he produced the project Sculpt specially for LACMA, Los Angeles, on the occasion of his eponymous solo show. His latest project is The Unplayed Notes Factory in Murano, which was curated by Nicolas Bourriaud as part of the 57th Venice Biennale. Gréaud’s work forms part of numerous public collections, including the Centre Pompidou, Paris; the LACMA, Los Angeles; the Musée d'Art Moderne de la Ville de Paris, Paris; Collection François Pinault, Venice; Fondation Louis Vuitton, Paris; Israel Museum, Jerusalem; Margulies Collection, Miami; Goetz Collection, Munich; Rubell Family Collection, Miami; Nam June Paik Art Centre, Yongin, among others.
www.maxhetzler.com