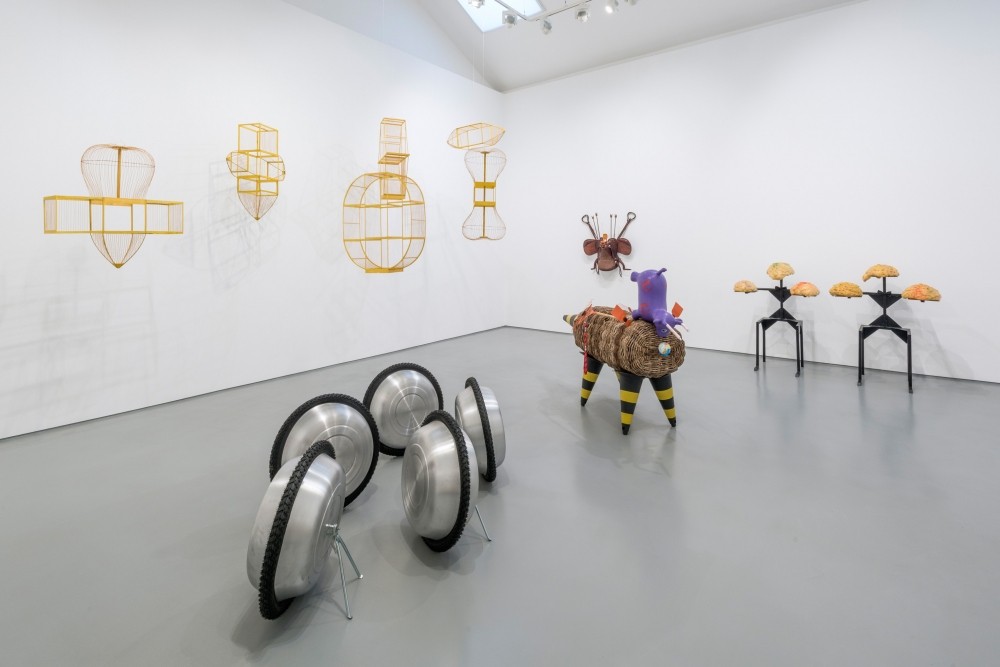 Suave na nave literally translates as “smooth on the ship”, a popular Brazilian expression which means taking it easy despite the frantic pace of the world around. Taking things smoothly is a rare ability, achieved by few. The exhibition attempts to create this slow pace with the use of everyday materials and objects that bring in references to customs and practices specific to smaller Brazilian towns, such as saddles, vines and birdcages.

Living and working in the Brazilian Northeast, Marepe’s work is pervaded with a rich cultural mix of European and African traditions specific to this region, one of the poorest of the country. The thematic repertoire of Marepe’s oeuvre is strongly influenced by the artist’s origins and personal life. Numerous work echo the ingenuity of Bahia’s street vendors and the long hours spent in his father’s hardware store. His work has also strongly been influenced by Brazilian Neo-concretists of the 1950s and 1960s and Marcel Duchamp. Marepe incidentally refers to his sculptural arrangements as necessities rather than readymades so as to stress their social influences.

The work The Small Town is a collection of wrapping papers from shops in Santo Antônio de Jesus where the artist lives that began twenty years ago. These papers have now been replaced by plastic and memorialize a town that lived with few services and resources. When walking around the town, Marepe often catches sight of objects from remote countries, mainly from Chinese shops with peculiar merchandise, alongside local products from the countryside.

From this encounter with these globalized goods emerges the work The World is Small, consisting of vine baskets, traffic cones and toys from China.

The Built-in series makes reference to architecture through the constructive methods of birdcages and Brazilian concrete art. The embedded birdcages, empty objects that touch on the issue of freedom and nature, constitute a kind of aerial architecture.

Rice and Beans is a diptych that speaks of the world and of food through its rounded shape, conveying the wish of the artist for people to always have staple food on their tables. As well as being the most popular food in Brazil, the two form together a great source of energy.

The two X-ray paintings were made from prints of objects. They refer to the ready-made, taking things from their original context and transforming them into figures that reveal the diverse range of products we have in our lives or in our memories.

Brazilian Civilization is a leather saddle that resembles a gigantic beetle encrusted with a ceramic cashew fruit and a metal toy soldier. It alludes to the process of civilization where leather was used in the construction of shelters that offered protection against the arrows of attacking natives while exploring the Brazilian lands. At this moment in time, we should certainly think back over the struggles we went through to become civilized.

Spaceship Parking reinforces hope for the future in the most singular way. Small vessels are parked as if this were something natural to find there. The work is made of basins and bicycle tires from other lands.

Live Nature is a composition made of wood saws and flower-patterned cobogós, hollowed-out elements used to allow greater ventilation and light inside a building. It refers to the still life (natureza morta in Portuguese, or Dead Nature) in art history but also in the real world. It is a call for the viewer to tread lightly on the Earth, living more peacefully while preserving natural resources.

As for the waiters (Garçons), they are always ready to serve us, guaranteeing moments of pleasure and joy with their friendly chat and precise attention. They reflect Marepe’s deep concern for social and human interactions.

In this fourth personal show with Galerie Max Hetzler, Marepe presents works filled with visual poetics where the inanimate seems to be coming to life.