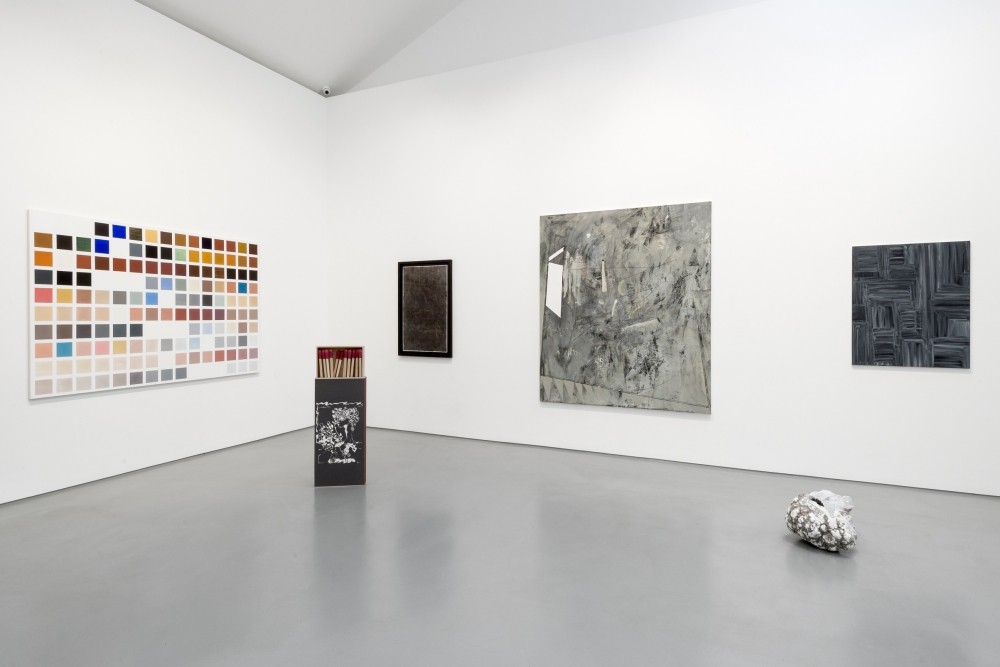 Matière Grise presents works in a variety of materials exploring various shades of grey that demonstrate the strong potential of this achromatic colour.

Changeable and mysterious, grey can express both a presence and an absence. The colour also allows for a variety of usages and interpretations. The relationship artists have to grey in their work can often disclose much about their sensibilities and intention.

Western art history for a while almost left grey aside despite the recourse to grisaille in ancient times. With regard to social representation, grey was seen at the end of the Middle Ages as the opposite of black and symbolised hope and happiness. The hue later often bore negative connotation in popular vernacular use, whether it be solitude, melancholy or sorrow.

Grey has a strong power of suggestion and also refers to positive references such as wisdom and knowledge. Goethe even considered grey as the origin of all other colours. It can actually be obtained not only from white and black but also from a mix of primary colours whose respective combination will determine the specific tone. Akin to black, grey absorbs light and thus emphasizes all the other colours around. It conveys a sense of harmony.

The neutrality that exudes from the use of grey allows for an experiment of forms but also a play with materials. We do not focus on colour but rather on materials and the works take on a new and deeper meaning.

Glenn Brown drew Adolph von Menzel’s foot on a dark grey background that transforms the original warm tints in a composition where only black and white stand out.
Notions of spatial depth and materiality seem to vanish in André Butzer's painting where thin lines convey a sense of weightlessness due to the great brightness that exudes form the monochromatic grey background.
Jérémy Demester’s Vin d’Anjou mirror-like surface changes colour according to its surrounding and shifts from blue to grey.
Loris Gréaud’s “forme-trajet” ("trajectory-form") is made with tinted waste oil whose flat tint displays a silent beauty, almost worrisome.
Günther Förg’s relationship with the monochrome is here embodied in a grey painting revolving around his emotional approach to formal disciplines and geometric configuration.
Raymond Hains resorts to the coldness of duraluminium to maliciously recreate the reflection of the Venice canals’ gondolas. In his panel on metal, the grey hue highlights the motifs of the torn posters all the more strongly.
Charline von Heyl's painting functions as an enigmatic presence. Its colours are unstable, transform shapes and convey a fleeting effect.
The grey tones in Liz Larner's ceramic result from the reflection of the light on the sparkling surface.
The iron dust that emerges from Navid Nuur’s rock confronts its explosive grey to the creamy-white stone.
Albert Oehlen plays with our senses in his surprising new painting that engages the viewer in a search for a code to this intriguing sequence of colours.
Edmund de Waal evokes alchemy in a “still life” of grey made of lead, Corten steel and ceramic.

The works on display reveal all the subtleties of grey. Never monotonous, it is a myriad of colours. Far from being neutral, it conveys meanings and messages. For this exhibition, grey sings all the tints it is made of and we are presented with a show filled with colours.
www.maxhetzler.com