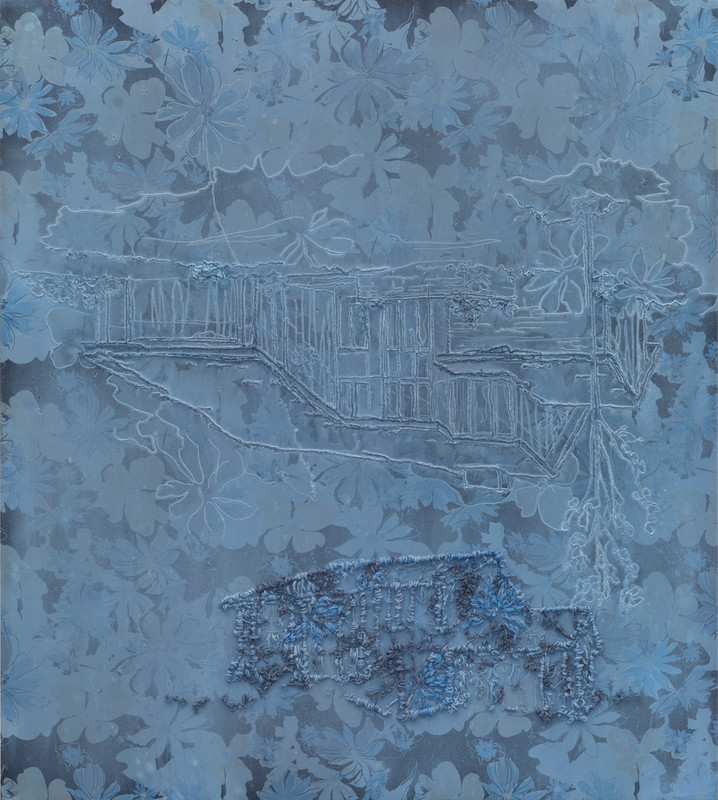 We are delighted to present the exhibition record with new paintings by Michael Raedecker in our space at Bleibtreustraße 45.

Michael Raedecker combines painting with different techniques of sewing and stitching. The combination of classic embroidery and minimal paint application pushes not only the boundaries of the medium painting but also explores the possibilities and the meaning of traditional craft in the art context. Raedecker creates works that address and expand the questions and expectations contemporary painting raises today and play with the meanings and clichés they provoke. The thread emphasizes contours, practically and quietly taking the topics in the works to their extreme. Its three-dimensionality and physicality enable certain friction and tension that characterize Raedecker's works.

Raedecker's motifs depict ordinary objects, still-lifes of dishes and plants, embroidered draperies but also modern architecture, such as the suburban home and the iconic skyline, all of it so familiar it carries an instant charge. Yet, these sceneries appear somewhat open, leave blanks and blind spots. In combination with muted grey and blue nuances his works thus evoke a mysterious almost uncanny mood. The question of the unknown, the invisible, constantly follows the perception. At the same time, his paintings offer a very private, intimate atmosphere. Showing banal, everyday surroundings, they emphasize how fast the familiar can become unfamiliar and surreal.

The paintings presented in this exhibition, mostly from 2014, pick up both new motifs and those of previous works, creating new contexts among each other. For the first time, Raedecker works on different textiles and fabrics and thus expands his practices by introducing a ‘ready-made’ surface. Fabrics, printed with floral or plaid patterns, partly replace the canvas and refer to embroidery as the essential technique of his works. By indicating possible patterns and elements of an unseen interior, such as wallpapers, curtains or blankets, the textiles both complement and disturb the embroidered motifs of suburban houses and skylines.
Raedecker further explores this practice by cutting the canvases into strips, rearranging and finally stitching them back together. The hereby fragmented works intensify the impression of an alienated setting and allow new, compelling compositions.

For Raedecker, paintings capture a certain mood, thus saving a particular moment, however banal. The title of the exhibition, record, refers to this process. The painting as a recording device, an evidence from our time. Similar to music, paintings always range from cheerful to melancholic, instantly transforming the atmosphere, setting the emotional tone.

»Observability and perverse surveillance hang in the air. Or, are we approaching a crime scene? Would our voyeuristic curiosity turn abruptly into fear and flight reflex were we to get close enough to see what's going on in the house? Ridiculous thoughts. It's just a painting of a house, nothing else. No reason for wild speculation.«

Questioning this atmosphere, how it can be hijacked, influenced and manipulated, Raedecker unleashes not only distinct feelings within the viewer but creates an oeuvre full of diverse readings and intangibility.

Simultaneously the gallery will inaugurate an exhibition with new works by Marepe at Goethestraße 2/3.