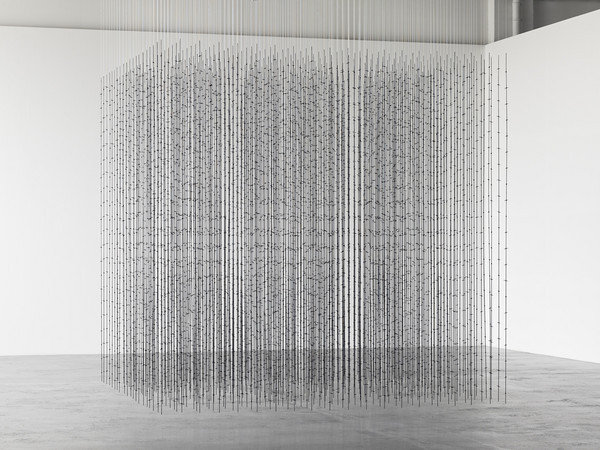 Galerie Max Hetzler is pleased to announce an exhibition by Mona Hatoum. 'Shift' features several recent works by the artist, including a new, large sculpture made of marbles and two works created during a residency in Istanbul earlier this year (Kapan iki and Shift). All of the works in the exhibition embody the artist's signature use of contrasting forms and materials as well as her interest in the themes of power structures, conflict and 'home'.

«Her installations, objects and performances impress themselves on the viewer's awareness with curiously self-effacing ingenuity which is provocatively undermined, nearly cancelled and definitively reduced by the utterly humdrum, local and unspectacular materials (hair, steel, soap, marbles, rubber, wire, string etc.) that she uses so virtuosically.»(Edward W. Said)

For three decades Mona Hatoum has been interrogating political issues through diverse metaphors that frequently reference Minimal Art and, in particular, its use of the grid. The installation Kapan iki (2012) consists of a group of human-scaled, cage-like structures, made from the steel rods used to reinforce concrete in building construction. Inside each cage is an ambiguous red glass shape, which seems to be oozing its way out, making a striking contrast to the formal grid of its enclosure. The work suggests themes of entrapment ('kapan' is the Turkish word for 'trap') as well as evoking a physicality and energy from within the sculpture.

Another installation entitled Bunker (2011) consists of a group of schematic, modernist-type buildings made out of modular steel tubing. The rectangular tubes have been stacked together and subjected to cutting and burning, making the sculptures look like buildings that have been scarred by war. Although mostly generic in form, some of the 'buildings' in this series of work are based on actual buildings in Hatoum's native Beirut. The maquette-like scale of this work suggests a future construction project in which signs of destruction are already present.

In Turbulence (2012), thousands of clear, differently-sized marbles are arranged in a square on the floor. The variables of shape between each hand-made sphere create natural patterns that are reminiscent of clouds, countries or continents. The overall impression is of a highly irregular ground, turbulent and swirling, yet it remains contained within a formally abstract square.

Shift (2012) is a wool carpet that depicts a world map overlaid with yellow seismic rings, suggesting that the whole world is a potential danger zone. The carpet has been sliced up and put back together and the deliberate misalignment of its sections destroys the topographical integrity of its image.

Worry Beads (2009) is based on a traditional rosary, used for prayer and meditation, that has been enlarged and cast in bronze. Through its dramatic change in size, the beads of the rosary now appear more like cannon balls making the sculpture resonate with war rather than peace.

Impenetrable (s version) (2010) is an installation built up from individual lengths of barbed wire that are hung from the ceiling to form a perfect, suspended cube, hovering slightly above the floor. The title refers to Jesús Rafael Soto's Penetrables, but this threatening avalanche of pointed metal stems is impossible to enter, heavy with associations and yet delicate and ethereal at the same time.

Over my Dead Body (1988-2002) consists of a large PVC billboard featuring a black and white close-up of the artist's face with a toy soldier poised to shoot between her eyes. The work is a humorous, yet contradictory image that reverses the idea of an aggressive male gaze, adopting the language of advertising and the street.

In her series of etchings Hair, there and everywhere (2004), Hatoum has utilised the abject material of hair – placed directly onto the ground of the etching plate – to create beautiful, self-made patterns that seem at once random and controlled.

Accompanying the exhibition will be a fully illustrated catalogue with an essay by Patricia Falguières.

This will be Mona Hatoum’s third solo exhibition at Galerie Max Hetzler.

The artist, born to a Palestinian family in Beirut in 1952, has lived and worked in London since 1975. Since 2003/04, when Hatoum received the DAAD grant of the Berlin Artists-in-Residence programme, she divides her time between Berlin and London. In 2004 she was awarded the Sonning Prize (University of Copenhagen) and the Roswitha Hoffmann Prize (Zurich), in 2010 the Käthe-Kollwitz-Prize (Akademie der Künste Berlin) and in 2011 the Joan Miró Prize (Barcelona).

Hatoum will be participating in the Liverpool Biennial 2012.
www.maxhetzler.com