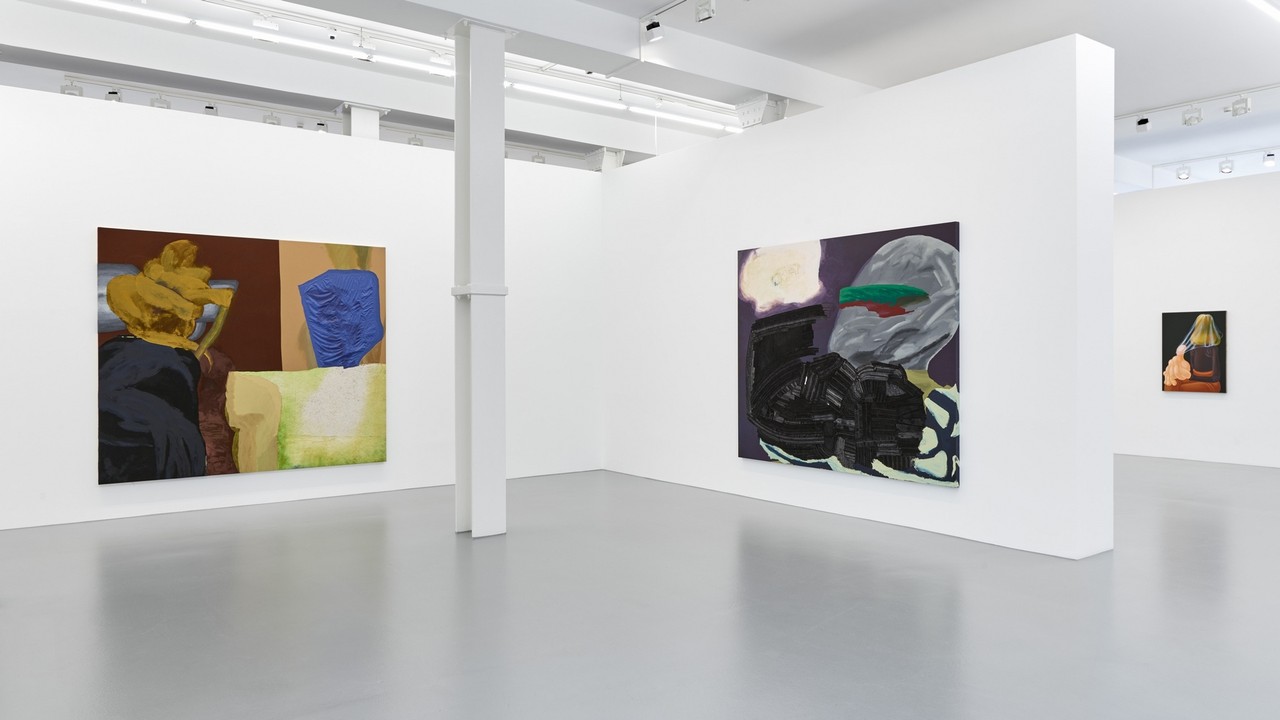 Known for her paintings of exaggerated proportions and grotesque features, in her works, Louise Bonnet (*1970 in Geneva, lives and works in Los Angeles) continually explores emotions of melancholy, loneliness, nostalgia or grief. Her portraits recall cartoon-like or surrealistic imagery but create a much more subtle and mild tone with a strong sense of corporeality, often picturing everyday activities or scenes. Bonnet's work has been featured in several exhibitions at galleries, such as Mier Gallery, Los Angeles; Gagosian Gallery, Athens (both 2016) and The Lodge, Los Angeles (2015), among others.

Interiors and still lifes filled, almost overloaded, with details and visual information characterise Celeste Dupuy-Spencer's (*1979 in Brooklyn, lives and works in Los Angeles) work. Her paintings and drawings depict seemingly mundane situations – watching a game in a sports bar, gathering for a barbecue, at a hairdresser – always linked to a sort of subculture, especially the white working class. Dupuy-Spencer’s work has been included in several group exhibitions at institutions, such as the Institute of Contemporary Arts in Boston, the San Francisco Museum of Modern Art, the Dia Art Foundation and the PS1 Contemporary Arts Center. Most recently, she was selected to participate in the Whitney Biennial in New York.

Multi-media artist Aaron Garber-Maikovska's (*1978 in Washington DC, lives and works in Los Angeles) paintings are made on white gator board – a rigid, synthetic material – and covered intensely with swooshes, loops, scribbles, at times even tag-like signs of bright colours and black lines. References to graffiti art as well as Abstract Expressionism easily come to mind and it is particularly ideas of movement, spontaneity and improvisation that form the base of Garber-Maikovska's practices. His paintings, videos and performances have been included in several group exhibitions at institutions, such as The Museum of Contemporary Art Denver and the Fahrenheit (FLAX Foundation) in Los Angeles, among others. Garber-Maikovska's work forms part of the collection of the Los Angeles County Museum of Art.

Often combining large scale screen-printed canvases depicting found images or fragments from textbooks, with small and intimate trompe l'oeil style paintings, Oliver Osborne’s (*1985 in Edinburgh, lives and works in Berlin) works reveal a deep interest in the meaning and ambiguity of words and images. In his small scaled works, he applies layers of photorealistic motives on top of each other, thereby constantly shifting the viewers gaze between background and foreground. Osborne has recently had solo exhibitions at Peles Empire, Berlin; Vilma Gold, London (both 2016) and at Giò Marconi, Milan and Catherine Bastide, Brussels (both 2015). His work has been included in group exhibitions at institutions including Inverleith House, Edinburgh (2017); Museo di Capodimonte, Naples (2014); Institute of Contemporary Arts, London (2012).

Walter Price's (*1989 in Macon, GA, lives and works in New York) paintings often approach topics of his own personal experiences, cultural symbols, questions of identity and social affiliation. Landscapes, interiors and dreamy sceneries often follow a variety of narratives and multiple dimensions that offer an insight into the broad image pool the artist is taking from. Price had his first solo exhibitions at The Modern Institute, Glasgow, and Karma, New York, both in 2016. His work has been included in group exhibitions at the Harriet Tubman Museum in Macon (GA); The Journal Gallery, Rachel Uffner Gallery, and Jeffrey Stark, all in New York.

Compositions of undefinable forms and shapes that, combined and layered, turn into familiar yet cryptic imagery mark the paintings of Odessa Straub (*1989 in Brooklyn, where she lives and works). Changing between abstract and figurative elements, her works form surrealistic moments that convey an elusive atmosphere. By including other materials to her paintings, like plastics and fabrics, such as latex, felt or fleece, Straub creates a certain sense of physicality that links her paintings to the outside world. Straub's work formed part of several solo and group exhibitions at galleries, such as Marlborough Contemporary, New York (2017); Accapella, Naples; Jeffrey Stark, New York; Moran Bondaroff, Los Angeles (all 2016); Mier Gallery, Los Angeles (2015); 41 Cooper, New York (2013).
www.maxhetzler.com