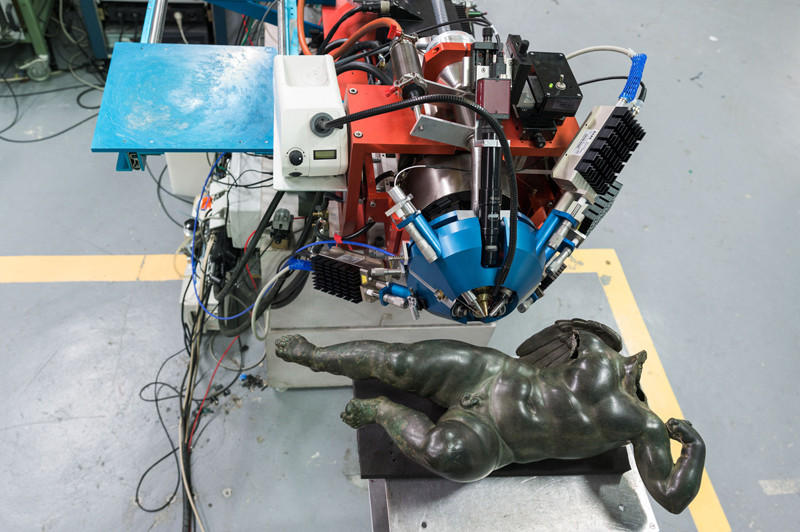 Galerie Max Hetzler is pleased to announce an exhibition of recent photographs by Thomas Struth from March 6 until April 19, 2014 at Goethestraße 2/3, Berlin-Charlottenburg.

Simultaneously, the group exhibition Then and Now with works by Anthony Caro, Barbara Hepworth, Bridget Riley, Edmund de Waal and Rebecca Warren will be inaugurated at the gallery space in Bleibtreustraße 45, Berlin-Charlottenburg.

Since 2009 Struth is recurrently photographing places of industrial innovation and scientific progress. Thus he approaches the complexity of technical developments and enables an insight into usually unaccessible areas, which at the same time leave uncertainty about meaning and function of the depicted. Highly evolved machines and devices from research and industry, but also medical facilities are shown on these photographs. The jumbled constructions and entwined wire installations often remain unclear, yet elicit fascination for the possibilities and spectrum of human inventions.

The exhibition presents new works from this series such as Table 1, 2013 and Golems Playground, 2013, taken at the Georgia Institute of Technology in Atlanta. The pictures show facilities of the Humanoid Robotics Lab, where robots with a high level of dexterity and interaction are being designed. Among mathematic formulas and technical equipment one can see toys, musical instruments, backpacks and clothes. For non-experts it is difficult to distinct between actual work materials and everyday objects. Therefore the rooms remain with a provisional appearance even though an enormous technical output is realised within them.
The most recent work, AGLAE, C2RMF, Paris, 2013, shows a particle accelerator at the Centre de recherche et de restauration des musées de France in Paris which carries out research on the constituent materials and techniques of artworks. The contrast between the technical instrument which approaches towards a centuries-old bronze statue to investigate its texture, brings to mind surgical operations on human beings and leaves behind an awkward feeling of subjection.

The most recent group of works was taken last year at Anaheim, California, where Walt Disney inaugurated the first Disneyland in 1955. It allows an insight view into the paragon of western image-making industries. In this scenery, yellow submarines are swimming as a matter of course in front of a replica of the Swiss mountain Matterhorn, canyons and ponds are located in immediate proximity. Similar to earlier photographs, these pictures often show deserted panoramas which appear somehow disconcerting for an amusement park attracting fifteen million visitors per year. Reduced to their outer setting, they unveil their nature as artificial, illusory worlds of papier-mâché. At the same time they refer to the great effort and precision with which these worlds are being staged.

The titles, consisting of only one word, for instance Mountain, Canyon or Pond detach the connection to the source of the images and allow further associations. It is not relevant anymore that the scenes were taken in Disneyland, they could have been taken anywhere. These attractions are not distinguished by any cultural reference but by a certain conformity of the places that could exist all over the world.

By contrast there are Struth's photographs of urban origin. The backyard view of the St. Petersburg Hotel Kovenskij Pereulok, 2005, or the South Korean city Ulsan 1, 2010, identify the depicted places even though the spectator might not recognize them. They refer to Struth's early city and architecture photographs in which he captures street views and complexes of buildings in a documentary way. The work Moskauer Bahnhof, 2005, is also part of this series, but since it shows people in an almost freezed state we are reminded more of his famous museum photographs. Here and there one can see people and their typical behaviour at certain places and at times recognize oneself among the crowd.