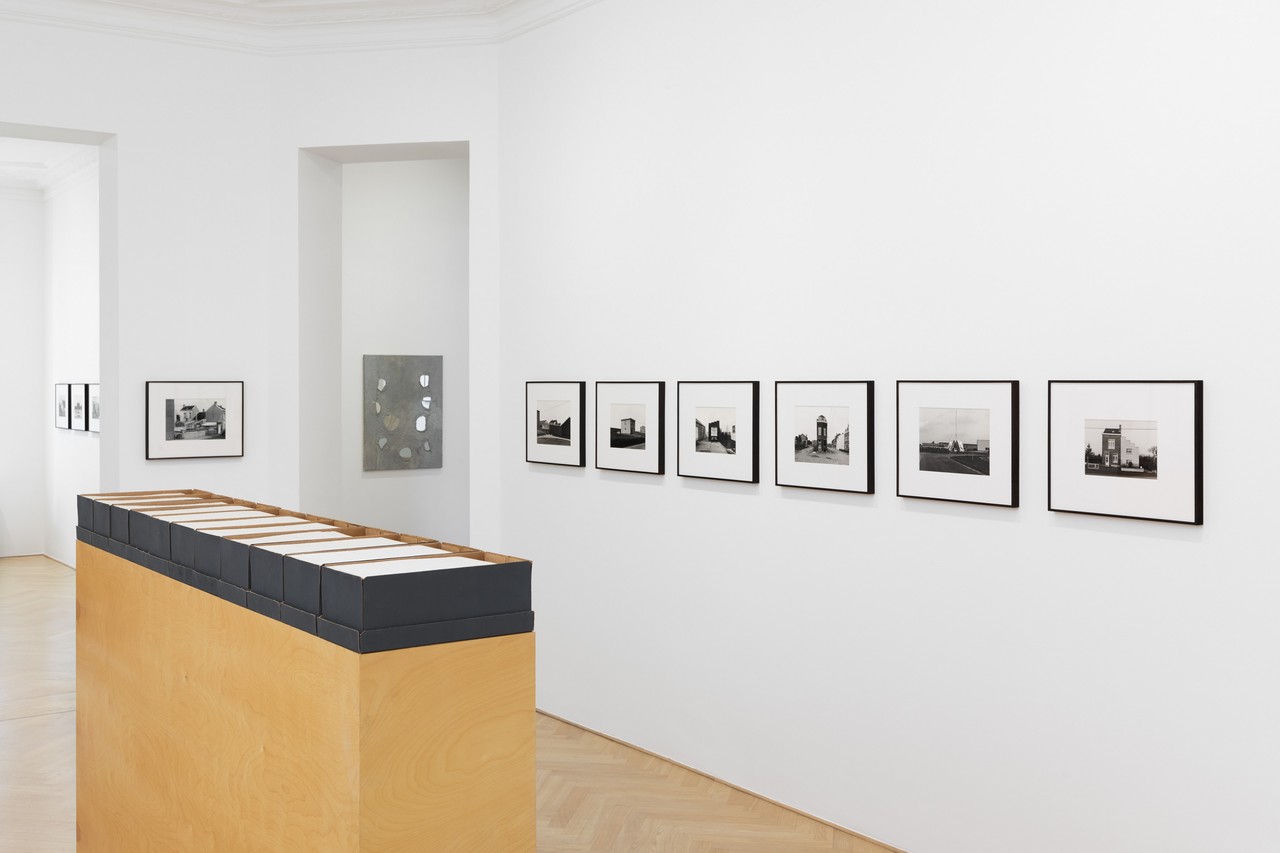 Galerie Max Hetzler is pleased to announce an exhibition with photographs by Wilhelm Schürmann in dialogue with works from his collection at Bleibtreustrasse 45.

Neighbours.
Photography shaped my view on art.
Art shaped my view as a photographer. I take my own images.
The possibility of art and photography in an interplay of diverse ways of thinking
and their potential of change to one's own perception characterise the impulse of our collection.
Reality-saturated, excited, light-footed, alogical, curious, entertaining, uncompromising,
lapidary is the art that moves me, is the image that finds itself.

The public view, the ordinary stage. The interaction of things.
The disturbance in the system. Chance. Blank space.
How is it looking out there. As a photograph? Everything is stuffed here.
Skyline and living room skyline; public space and private view;
Surrounding Suburb Concentration City. Street photography.
Same places, same motifs, same paths, iteration loop.
The same, the same again, again and again, through the forest.
Thicket. Gespinst. Reading Machine for Lenz. Repetition as change.
An artwork as a trigger, new, credible, exemplary. Portbou!
Language, books, images. Re-read, re-peat, re-see. Collection active.

As a photographer I am a collector, anyway. Things are gathering.
Small miniatures of lived life build my archive.
What do I show, What do I keep for myself. What is private? Schürmanns Lichtung.

Vintage prints from the time of their exposure, now time capsule of an historic photograph.
Poetry is what remains. The selection makes the difference.

The photographed image is always already past. The view is presence.
Presence as the space between. Shortlybeforeafter. The images are looking back.
The future has no images yet. Reality and its construction.

It is always the light that makes a motif shine.
The images found me, I never searched for them.
I love this world. Now also in colour.

At the same time, Galerie Max Hetzler presents an exhibition with recent works by Liz Larner at Goethestrasse 2/3.

Wilhelm Schürmann, was born 1946 in Dortmund, he lives and works in Herzogenrath and Berlin. After studying chemistry in Aachen, Schürmann worked as a photographer for several daily newspapers. In 1972 he started collecting art and since then, builds up a comprehensive collection of contemporary art. From 1972 to 1976 he taught photography at the RWTH Aachen and from 1981 to 2011 Schürmann held a professorship of photography at Fachhochschule Aachen. His work has been exhibited in important institutions, such as Westfälischer Kunstverein, Münster (1977); Museum Folkwang, Essen (1982); Sprengel Museum, Hanover (1994) and Kunstverein Hamburg (1999). Schürmann's works form part of renowned collections, such as MoMA, New York; Getty Museum, Los Angeles; Art Institute of Chicago; San Francisco Museum of Modern Art; Folkwang Museum, Essen; Sprengel Museum, Hanover; Pinakothek der Moderne, Munich; Stiftung F.C. Gundlach, Hamburg and Photographische Sammlung / SK Stiftung Kultur, Cologne, among others.
The Schürmann collection was presented in exhibitions, such as Temporary Translation(s), Deichtorhallen, Hamburg (1994); Das Ende der Avantgarde, Kunsthalle der Hypo-Kulturstiftung, Munich (1995); Das Gespinst, Museum Abteiberg, Mönchengladbach (2010) as well as Dirty Data and Le Souffleur. Schürmann trifft Ludwig, both at the Ludwig Forum, Aachen (1992 and 2015).
www.maxhetzler.com