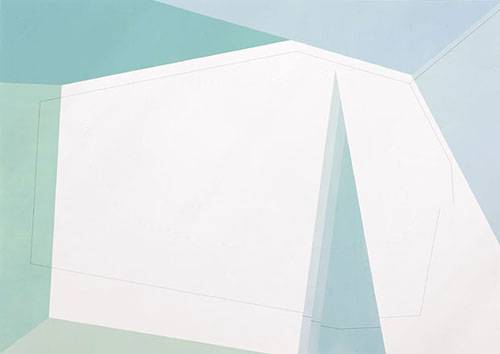 This exhibition at Galerie Max Hetzler, Zimmerstrasse 90-91, which celebrates the work of 22 artists from Europe, the United States, Middle East and Latin America, documents the continuing commitment to drawing and collage as a finished independent form, demonstrating the current status of drawing as a primary medium. It excludes exploratories studies as works whose primary emphasis are conceptual rather than visual.

One approach sees images containing words with allusive intentions, such as Martin Kippenberger's witty drawings on hotel stationery, the thought on the run, hopping between many registers, where the German past is approached through incisive parody.
With Albert Oehlen, collage is pushed beyond mere Dada juxtaposition echoing the matrix of communications media.
Günther Förg practices painting, photography, drawing and sculpture as separate modes, reserving each discipline to its "proper" genre.
About her drawings, Chloe Piene says "There's a play between what's covered and what is uncovered. Every layer that is revealed becomes a reference to a deeper point, a greater darkness, a new unknown".

Along with the absence of chronology and narration in their evocation of the fantastic and the world of dreams, the relationship between figure and space is conspicuous in the work of Jorge Queiroz: in his drawings, figures - hybrids between plant, human and animal - appear to be connected with rooms or room-like constructions.
Graham Little uses colored pencils to suffuse his subjects in chromatically saturated atmospheres, managing to connect his generic models of the latest fashion to the tradition of the female allegorical figure.

Yves Oppenheim's compelling abstract work on paper demonstrates the fragility of what we perceive. His approach is introspective in its own distinctive way.

With his work, Arturo Herrera establishes a similar relationship to the viewer, leading to the unconscious process of associative meaning that stems from visual perception.

The painting technique that Beatriz Milhazes uses relies on the principle of collage. For these she employs industrial material, paper wrappings for chocolate and tissue papers which express seduction, pleasure and exageration. She transforms elements of the ephemeral in order to explore personal rules of engagement. The aesthetic gratification comes from the rich seams of visual freedom and emotional experience.

"Mental Maps" is the appellation Franz Ackermann uses to suggest that each work is a picture of the mind as it reacts to the stimulus of a particular environment.

Kara Walker adopts the style of vernacular illustration as a means to examine cultural traditions adopting specific imagery. She mines history to comment on the present. The past she retrieves is the story of African enslavement in America. Walker graphically depicts transgressive, sometimes horrific doings in an antique style that only emphasizes the disturbing nature of the subject.

Richard Phillips's drawing Minnow Head reflects on the faded appeal of beauties no longer in the limelight. His sources are culled primarily from magazines dating between the 60's and the 80's. Standing in for the almost unqualified propagations of zeitgeist that shifted from the flower power of the Hippies to the thoroughly commercialized sex appeal of bodies and goods, the apathetic gaze of models evoke the collective memory of industrialized free love and stardom.

André Butzer's drawings depict one of his trademark figures. The effect is as if he wanted to draw for children: pictures of giants, a toy world, abundance and monumentality. He seems to be as interested in the empty surface than in the straw-fire of a handful little lines that he has committed to paper.

Mike Kelley produces different cycles of drawings and rejects a distinction between modes based solely on support. He is interested in the graphic as an aesthetic category in itself, he conceives a drawing as a skill through which any graphic style may be appropriated.

The drawings of Ellen Gallagher entice the viewer into dialogues that investigate and reinvigorate our contemporary ideas about race, identity and historical traditions.

Christopher Wool's drawings could be described as Jerry Saltz did in a recent review "His work has always been a disconcerting but alluring combination of resistance, intelligence and graphic flair...The partitions are open on the sides, so you can see what they are made of and how thay are made, disallowing illusionistic space".

Marepe's allegories made out of glitter on paper bring to mind an expression by fellow Brazilian artist Oiticica, "Urban poetic event". We could also add, new life to still lifes, urban and suburban, social contradictions uniting the indispensable and the futile.

Mona Hatoum's use of kitchen utensils for her delicate rubbings on Japanese wax paper opens to the viewer a new level of reception through allusions to every day life. As a result, her drawings look both haunted and haunting.

Video artist Haluk Akakçe's drawings are abstract images that evoke a resemblance to imaginary spaces but more about the depth of stillness, as opposed to his video work where the forms find definition in motion.The forms here find meaning with their shadows creating an illusion as if they are coming out of the paper.

Darren Almond's drawings that map the progress of the stars across the solar system have ramifications with other works of his related to the particular themes reccurent in his œuvre, of time and space.

The exhibition is accompanied by a catalog that includes an essay by Kirsty Bell.