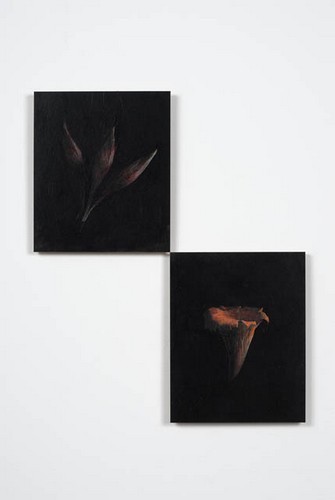 ATHANASIOS ARGIANAS
"Until full Stops look like stars, From where you stand"

Athanasios Argianas’ practice spans diverse media and formats and looks at a wide range of cultural references. His works are centered around questions on music, language, non-linear time and memory and a core concern about how we process and record information. Characterized by series and re-workings, Argianas’ practice builds on a methodology of continuous translation of forms and media into one another: how can a sculpture become a song? How can date and time form an image?

The exhibition opens with two small paintings from memory (a Chanterelle mushroom the artist cooked a few weeks ago, and a muscle he saw, as a student, in an anatomy atlas a dozen years ago). Immediately afterwards, one sees a convex/concave disc, its concave side crumpled and its convex side smooth; a second disc, which looks like it could be the doppelganger of the first, hangs a few meters away. Elsewhere, photographs of the shadows of three sphinx statues in the national archaeological museum in Athens, are stacked on top of each other forming a three-sided column. Another shadow, which is that of a slowly rotating sculpture spelling out lines of text, is projected on a wall which in turn is inlaid with cast reliefs of the artist’s studio wall where the piece was filmed: in effect, a negative of the original.

A song – a canon for three female voices – is performed and filmed through a structure of three mirrors offset at thirty-degree angles to each other, one facing each singer, and then projected onto a scale model of the same structure made of card & brass. The singers, each projected on a different plane, are singing the same melody & lyric, but each beginning at a different point in its timeline, as if there were three commencements: is this a single harmonic entity, or a song sung at three different points in time?

The exhibition, its thematic in microcosm in the juxtaposition of a dissected muscle beside a picked mushroom, is a system of dissonant relations asking to be navigated. We are invited to forge connections between, for example, language, consonants and ideas of noise, the play of perspective and notions of time as experienced, shadows as perspectival maps of absent objects, and repeated models of an identical formlessness as a visual memory test. A publication with contributions by friends and colleagues, edited by Argianas and Francesco Pedraglio, will be launched as a part of the exhibition on the opening night.

Athanasios Argianas (b. Athens, Greece, 1976) lives and works in London. This year he was selected for ‘Heaven’, the 2nd Athens Biennial and short-listed for the Deste Prize; he was also invited by Susanne Neubauer to present a solo project for ARCO (Madrid). In August 2008 Argianas produced We All Turn This Way, a performance and installation event in three parts commissioned by The Serpentine Gallery Pavilion (partly in collaboration with Nick Laessing), and later took part in The Serpentine Gallery Manifesto Marathon with Manifesto Of Nondurational Time. The same year, he had solo shows at Galleria Alessandro de March (Milan) and Arquebuse (Geneva). In 2007, he had a solo show at The Breeder, (Athens). Group exhibitions have included ‘Pale Carnage’ at Arnolfini (Bristol, 2008); the Liverpool Biennial (as part of Bloomberg New Contemporaries 2006); and the 2003 Prague Biennial.
www.maxwigram.com