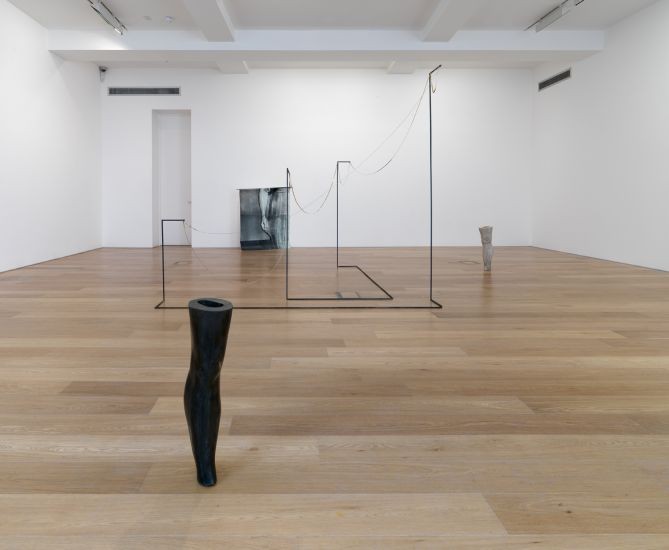 A sheet of the width of the wingspan of a plane, a plane of strands of the width of your arms unfolded, folded to form a cylinder. A sheet shaped into a cylinder with an inside, and an outside. An outside as long as its inside, an inside much shorter that its outside... Athanasios Argianas

Athanasios Argianas presents Laid Long, Spun Thin, an elaborate extension of his Song Machine series. His sculptural manifestations of language, duration and materiality continue to play on the legacies of arte povera, Art Nouveau and minimalism.
A large brass and steel Song Machine, supports elegant text-etched long thin metal ribbon, which are draped, bent & shaped as if fabric. The text on the ribbon describes hypothetical or virtual objects – parts of the human body, objects in relation to length and width, or another sculpture even, elsewhere. The two marble-like leg forms, standing either side of the Song Machine, which are both made from casts, contain the negative of an arm & hand inside another person’s leg, suggesting the possibility of intimacy and an overlap in time and space.
Proposal for A Reading Machine II (You, With Your Opacity) has the appearance of a handrail. Either a sheet formed into a spiraling cylinder, or a cylinder cut to open into a sheet, it carries text in an early 20th century font still reminiscent of the then recent art nouveau.
A rolled up print, Image Of Kore (fold), depicts an archaic Greek statue, an early and somewhat heavy-handed attempt at conveying fabric through marble.
The works in this show all share an ambition to exist in the real world, to bridge the divide between their physicality and their functionality; Laid Long, Spun Thin consumes and uses the gallery space, and turns it into one whole experiential work.
Athanasios Argianas practice, which spans a diverse range of media and format, explores a wide range of cultural references in order to focus on a core concern on the way in which we process and record information. Ideas about one material behaving in the manner of another, of transformation, translation, an open notion of ‘score’ is all approached through Argianas’s practice. Recent performances at both the Barbican and Tate Gallery, featured Argianas Song Machine installations doubling for the first time as a spatial score, to render a fusion between sculpture and live vocal performance.

Athanasios Argianas was born in Athens, Greece and currently lives and works in London. His exhibitions and performances include 3rd Thessaloniki, Biennale of Contemporary Art, Greece (September 2011), Art Now Live, Tate Britain, London (March 2011), The Length Of A Piece Of String Cut At The Width Of Its Circumference (The Breeder, Athens, 2011); Art Nova, (with Pavel Büchler, at Art Basel Miami, Florida, 2010), The Length Of A Strand of Your Hair, Of The Width Of Your Arms, Unfolded, (EMST, National Museum of Contemporary Art, Athens, 2010), Arco Solo Projects (Arco, Madrid, 2009) and We All Turn This Way, Serpentine Gallery Pavilion (with Nick Laessing, at Serpentine Gallery, London, 2008). He has also participated in numerous other solo and group exhibitions internationally, including: Arnolfini, Bristol, Dundee Contemporary Arts, Scotland, La Chambre, Xippas, Paris and Grimm Fine Arts, Amsterdam. He was selected to participate in Heaven, the 2nd Athens Biennial, and was shortlisted for the 2009 Deste Prize.
www.maxwigram.com