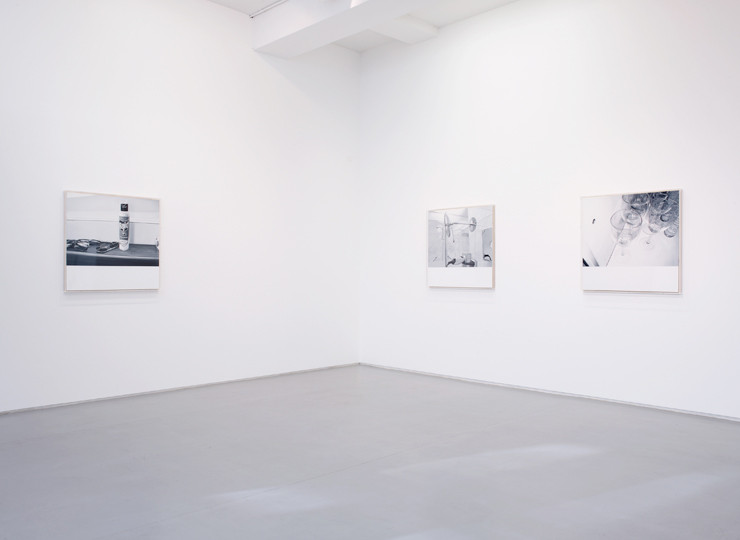 Max Wigram Gallery is pleased to announce the opening of ...and from this Position, an exhibition of four new monochromatic paintings by James White.

With this exhibition, White continues his archiving of the banal, neglected and unnoticed fragments of daily life. Depicted from awkward angles and with intense meticulousness, the clusters of objects that inhabit White’s paintings take on an almost eerie quality, more associated with forensic photography than the still life tradition. Sinks, cans of pesticides, and wine glasses are the residue, or evidence, of something that has occurred or that is occurring. The paintings invite audience speculation, forcing us to conjure up narratives. Although our gaze is intensely focused on these objects, depicted with crystal clear, almost clinical precision, our main concern is what is outside the image.

White reiterates this open-endedness in the exhibition’s title ...and from this Position, alluding to the continuation of a narrative. But it also reminds us the fundamental question that White’s paintings pose, that of the subject. White paints after a picture. What we are presented with is not just a fragment of the quotidian, or the prelude or aftermath of an event, but with the very act of looking. At the core of these paintings lies not what is seen, but the seeing itself - literalised in the play of mirrors and shiny surfaces, both real and represented, of this new body of work.

Vision takes on a physical, haptic quality in White’s work. The exacting, time-consuming facture of the paintings introduces an element of time to the still image, but, most importantly, asserts the presence of the artist’s embodied gaze. In White’s words: “what painting can do that photography can’t is to allow the viewer direct access to the actual physical evidence of artistic labour, to connect with the author, to occupy the same space in front of the work as the person who created it”.

It is thus paramount that the paint announces itself. For the first time, the artist has used sheets of opaque white Plexiglas as the substrate for the paintings, which are encased in Perspex box frames, heightening the reflective quality of the varnished surface. The support remains untouched in large portions of the works, recalling the cold, shiny feel of the porcelain of the sink, of the white enamel of the spray can, of the white marble-clad walls, creating a strong link between the physical qualities of the substrate and those of the subjects depicted. The painting is tied to the things it represents, reminding us of the illusion, heightening the objecthood of the painting. The works in this exhibition expand into our space, firmly consolidating our physical presence and our position, too.

James White (b. in 1967) lives and works in London. His latest work has been shown in the solo exhibitions The Black Mirror at Sean Kelly Gallery, New York, and Cornered at Max Wigram Gallery, London. James White’s work has been shown in internationally renowned institutions such as Kunsthal Rotterdam; Weserburg Museum of Modern Art, Bremen; Kunsthalle der Hypo Kulturstiftung, Munich; ICA Institute of Contemporary Arts, London; The Saatchi Gallery, London; Goss Michael Foundation, Dallas. In 2006, White was awarded a prize in the prestigious John Moores Contemporary Painting Prize. White’s paintings are part of many private and public collections, including Fundación Alorda-Derksen, Barcelona; Goss-Michael Collection, Dallas; The Saatchi Gallery, London; the Hildebrandt Collection, Berlin. White is the subject of a major monograph, James White: Paintings, with essays by Martin Herbert and Jeremy Millar, published in 2011 by FUEL. White’s paintings are featured in Michael Petry’s book Nature Morte, published by Thames & Hudson and set to be released in October 2013.
www.maxwigram.com