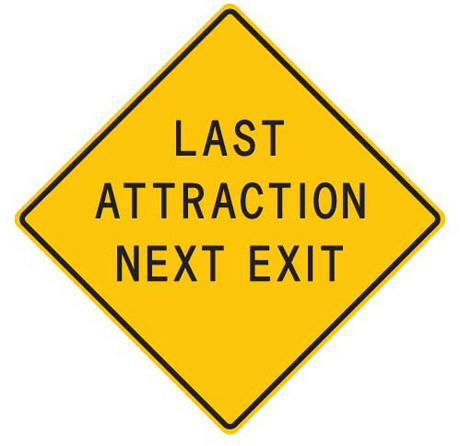 “Nevertheless,” continued Callisto, “he found in entropy or the measure of disorganization for a closed system an adequate metaphor to apply to a certain phenomena in his own world. He saw, for example, the younger generation responding to Madison Avenue with the same spleen his own had once reserved for Wall Street: and in American ‘consumerism’ discovered a similar tendency from the least to most probable, from differentiation to sameness, from ordered individuality to a kind of chaos. He found himself, in short, restating Gibbs\' prediction in social terms, and envisioned a heat-death for his culture in which ideas, like heat-energy, would no longer be transferred, since each point in it would ultimately have the same quantity of energy; and intellectual motion would, accordingly, cease.”’
Thomas Pynchon: Slow Learner

According to official tourist boards the last exit has been passed and the familiar landscape of high-lit phenomena and grand ambition become mere signage in the rear-view spectacle of our own recession. Downshifting through the cultural landscape we find our way through the litter of low frequency events, distorted signage, home-front insurgencies. broken hard-drives, fractured pixels, dead-end obituaries, and other billboards of romantic doom. Here finally sublime grandeur and transcendental stupidity can exist side by side. Whether preaching religion while watching porn or reading the Post while listening to the roar of the Niagra Falls, ours is an experience born of the rift between individuality and chaos, formed as it is between what is seen and what is heard, between the flush signature of consumerism and the empty landscape of the sign. This is the place where lavender mist is a fragrance and history has gone to shit, where bullet-proof glass voids the transparency of our protection, where macho posture departs from the codification of its hard-core regime to become pure abstraction. And in this we are all slow learners stoking the embers of rationality watching for the sparks that ignite interest and put intellect in motion.