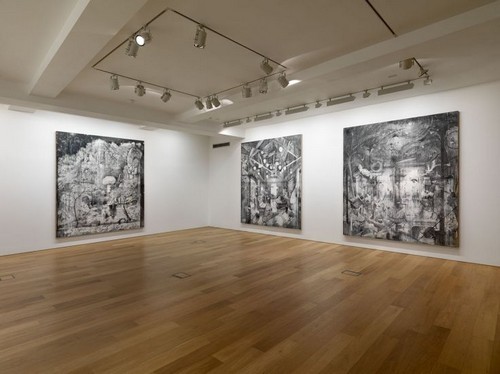 I have since the very beginning of my artistic career been making things for myself, paintings and sculptures not meant to be shown anywhere else... Manfredi Beninati

Manfredi Beninati creates lands of fantasy reinventing rarefied, dreamlike experiences, exposing fragments of inner worlds, and exploring ideas of journey, memory, the struggles of life and the securities of childhood.
In Dicembre 2039, his most personal work to date, five large-scale drawings hauntingly portray members of Manfredi’s family; his mother, girlfriend, son, father and brother Flavio who has since tragically died. Each large-scale black and white drawing illuminates Beninati’s intimate perspective on the person’s life, whilst an accompanying sculpture evolves an element in the work - a chair, a tree, animals, a pastoral scene... Begun in 2003 as a long-term private project, the intricately detailed works draw inspiration from the family photo album and Beninati’s memories and experiences to reveal the subjects’ inner worlds and lives.
Manfredi Beninati began working as an artist making sculptures, figurative and still life paintings in 2000, drawing directly on real or imaginary childhood memories. His installations appear to be deserted sets, spaces that are often inaccessible, seen only through cracks or darkened glass soliciting a sort of voyeurism, and using art, film and literary references to great emotional effect.
For further information, interviews and images please contact Janette Scott on janettescottartspr@gmail.com or 07966 486156, press@maxwigram.com or call Max Wigram Gallery on 44 (0)20 7495 4960.

Notes to Editors
Manfredi Beninati exhibited at the 53rd Venice Biennale, and the 51st where he received the audience award for the Italian pavilion. He currently lives and works in Palermo. In 2009 he also exhibited at the 4th Prague Biennale, the Athens Biennale and the Istanbul Biennale. In 2008 Beninati had solo shows with Tomio Koyama Gallery (Tokyo) and Max Wigram Gallery, and also participated in the Quadriennale di Roma and Liverpool Biennial. In 2007 he had a solo show at James Cohan Gallery (New York).