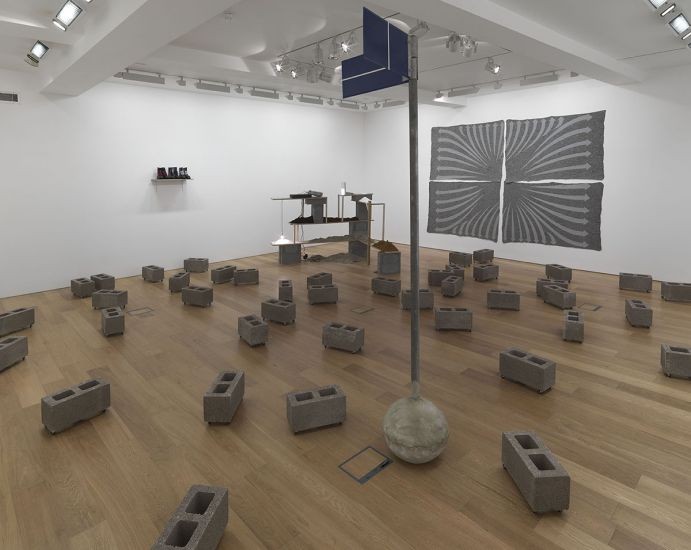 Concrete blocks on wheels scattered across the floor overlooked by a concrete-weighted street sign; a large hammer protruding from a wall; a fragile shelving structure supporting salt, sugar, coffee, cement, glass, concrete and a video projector; and a blanket of industrial felt hanging on the wall, comprises The Natural Order of Things. This is the first time rising young Brazilian artists Marcelo Cidade and André Komatsu have exhibited together, and is their first significant show in Europe exploring the interface between public and private spaces, and processes of construction and deconstruction.
Cidade (‘city’ in Portuguese) and Komatsu are influenced by – and question - the architectural contrasts of their native São Paulo; the longevity of Modernism and the contemporary futuristic city starkly juxtaposed with temporary makeshift structures. Komatsu roams the city collecting urban debris from the streets, later transforming it into sculptures and installations that challenge and change the gallery space. In a reverse of this, Cidade renders everyday objects in concrete, making their basic functions redundant, or erects seemingly purposeless graffiti covered structures in random places.
The Natural Order of Things is the culmination of the artists’ complementary creative processes that began when studying together at Brazil’s Fundação Armando Àlvares Penteado and continues in their shared studio space. Critical of the idea of authorship, they make no differential about who has made what in their show for Max Wigram Gallery.