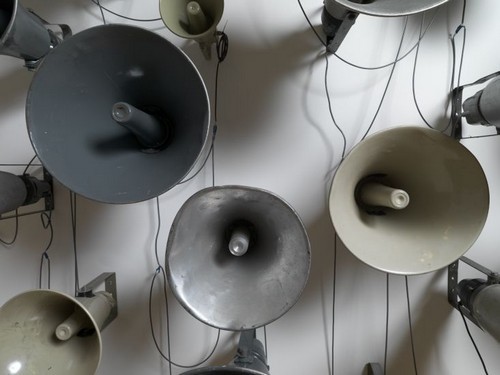 Strange unintelligible computerized speech emits in unison from seventy-five horn speakers fixed across the expanse of the wall. On a table close by, a lone horn leads the chorus...
Studio Schwitters is Pavel Büchler’s homage to Dada artist Kurt Schwitters sound poem, The Ursonate, his ‘primal sonata’ or conception of what a sonata would have looked like and sounded before the invention of language. Using a digital German speech programme, Büchler made it read the entire text of The Ursonate, impressively producing its own alien interpretation of Schwitters’ original twenty-one minute sung version of the sonata. The programme resolutely mashes The Ursonate’s very classical structure, radically changing content and structure, and extending the piece to thirty-nine minutes.
Considered by many to be one of the most influential and important great sound poems of the twentieth century, The Ursonate, has been reinterpreted by sound artists around the world. Schwitters’ own recording of it was lost for many years, finally turning up in Holland in the late 1980s.
Pavel Büchler describes his work as ‘making nothing happen’, considering art as a catalyst to reveal the everyday and the obvious as ultimately bizarre. He manipulates literature, found objects, old audio recordings and photographs, obsolete technologies and other media, making it relevant to the present.

Notes to Editors
Pavel Büchler is an artist, lecturer and writer, based in Manchester. He is the winner of the 2009 Northern Art Prize and has had solo shows at Max Wigram Gallery, Tanya Leighton (Berlin) and annex14 (Bern). Forthcoming projects include a solo exhibitions at Kunstparterre (Munich, Germany) and his participation in the group show Luc Tuymans: A Vision of Central Europe in Bruges (Belgium); recently a large retrospective of his work was held at DOX, Prague (2010); he also showed in The Human Stain at Centro Gallego de Arte Contemporánea, Santiago de Compostela, Spain.
Max Wigram Gallery was established in 2002 and represents a range of internationally acclaimed as well as emerging artists, including Athanasios Argianas, Manfredi Beninati, Mike Bouchet, Pavel Büchler, Slater Bradley, FOS, Barnaby Hosking, Marine Hugonnier, Mustafa Hulusi, Julian Rosefeldt, Christain Ward, Richard Wathen and James White. www.maxwigram.com