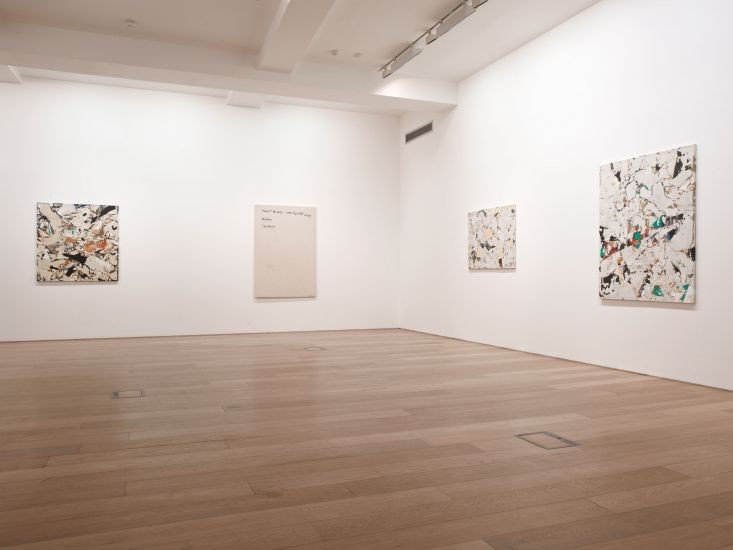 The world is full of objects, more or less interesting, I do not wish to add any more
Douglas Huebler, 1969

Pavel Büchler has always insisted that his series of ‘Modern Painting’ is purely a matter of bringing something out of something rather than something out of nothing. NO NEW WORK at Max Wigram Gallery extends his approach to the found paintings he has used in the past. He maintains that instead of making something new he is indeed carrying on with something that already exists, playing with a notion that has much more to do with re-stating what is already there than minimalism.

Büchler is changing his relationship to the paintings he uses because this time he is dealing with the work of just one person, that of Eddie Wolfram, an enigmatic artist, critic and music producer, who moved to England from Germany in 1948. A large number of Wolfram’s paintings were shown at a posthumous exhibition in a Manchester Oxfam shop in 2010. Büchler will show one of the paintings stretched back to front, with the original artist’s signature on the back of the canvas becoming as viable an image as the reconvened paint on the others.

The exhibition title alludes directly to the fact that everything in the show has already been there; that instead of an expectation that new art work is in fact the very latest in artistic terms, this re-making of paintings, through a meticulous, labour intensive method bereft of aesthetic and artistic considerations, has much more to do with production, uniformity and manufacture. The six ‘Modern Paintings’ themselves, still nonetheless, carry the logic, colour and material of painting and function in the same way as any painting, and questionably much better than some.