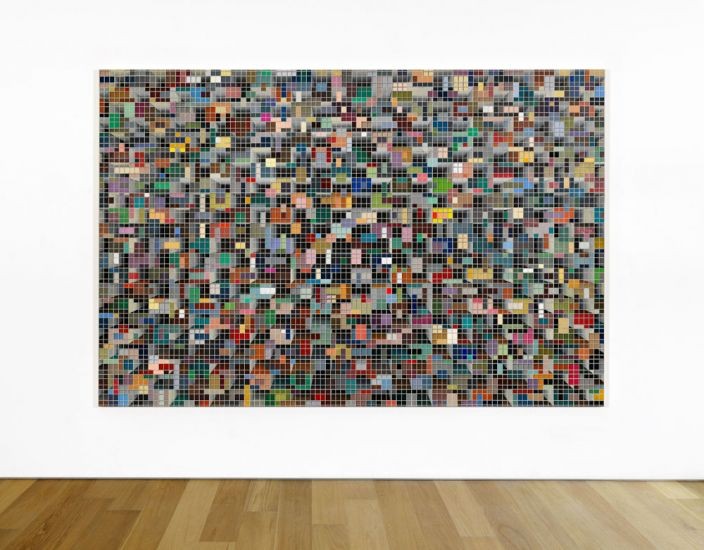 The exhibition, which features new paintings by three artists, follows no particular theme. By recognizing the fact that painting, in particular, is able to function in an autonomous way, it hopes to provide an opportunity to see a selection of individual works in their own terms.
Luiz Zerbini, who works in a number of media, with painting also covering a range of genre, shows two paintings here that follow a geometric principle. Zerbini’s paintings always morph however between over view, abstraction and description. The grid soon reveals itself to be actual in some sense, the ambiguity of scale, the principle of pattern, gives way to the actual description of the front of a building. This creates a circularity of understanding as the principle of modern structure, abstract and geometric, feeds into the surface.
Richard Wathen has completed a set of invented portraits, where the paint itself works in a reverse manner to make someone who might not have existed appear as a memory of a truth. Each person pictured plays against obvious objectification, carries an ambiguous aura of age and sexuality, to counter real memory.
Vicky Wright uses the swerve and movement of brush to paint images both iconic and Gothic. From blurred mark to heightened moments of focus, her imagery conjures the portraiture of the boardroom, for instance, by gathering together the imagery of power.

Richard Wathen (b.1971, London, UK) now lives and works in Norfolk. His 2011 exhibitions include a solo at Max Wigram Gallery, ‘Von Engeln und Bengeln – 400 Jahre Kinder im Portrait’, Kunsthalle Krems, Austria and ‘From the Recent Past: New Acquisitions’, LA MOCA. In 2010 Wathen’s projects included a solo show at Salon 94 in New York; PASSION FRUITS picked from the Olbricht Collection at me Collectors Room, Berlin; ‘Dawnbreakers’ at the John Hansard Gallery, Southampton and ‘Bigminis’ at CAPC Bordeaux, France. In 2009 he had a solo show at Max Wigram Gallery and was in ‘Young/Old Masters’ at Robillant and Voena, London. Other exhibitions include ‘Go For It’, Neues Museum Weserburg, Bremen, Germany (2008), ‘No End in Sight’, Galerie Polaris, Paris, France (2008), and ‘Old School’, Hauser & Wirth, London (2007),  ’Eau Savage Part II’, Fieldgate Gallery, London (2007). In 2004 he exhibited in ‘Expander’ at the Royal Academy of Arts, London.