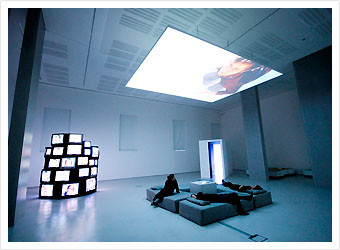 Internationally renowned for his intense video-installations featuring multiple screens and suspended between fiction and document, Kutlug Ataman (Istanbul, 1961, lives and works in Istanbul and London) and his art explores the complex nature of personal and collective identity, giving rise to portraits of great intimacy while at the same time also tackling broader social themes.

In Mesopotamian Dramaturgies, Ataman’s most ambitious project to date and presented in its entirety for the first time at MAXXI, the theme of the construction of identity invests an entire geographical area, that middle ground between East and West that Turkey represents particularly well. The eight works – films, video installations and photographs – that constitute the cycle reveal the tension, the effort, the contradiction and the results of the meeting of two worlds, from the thrust towards modernity to the persistence of tradition. Realised in what is today one of the most archaic areas of Turkey, the South-East, on the border with Iraq, as is customary with Ataman’s works they give voice to “marginal” figures, those who have remained on the edges of the impetuous development underway elsewhere in the country.
www.fondazionemaxxi.it