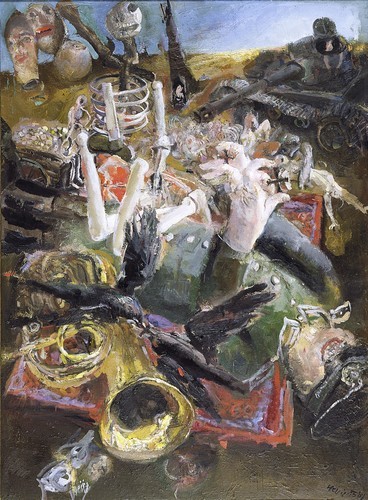 In 2010, the Leipzig Museum of Fine Arts received 126 paintings and 33 sculptures as permanent loans from the Peter and Irene Ludwig Foundation. The works are excellently suited to complement the museum's own inventory of art in the GDR. The works have been publicly exhibited since 2010, primarily in dialogic presentations: Hartwig Ebersbach and Volker Stelzmann, Hubertus Giebe and Wolfgang Peuker, also Wolfram Ebersbach and Sighard Gille. In 'Ludwig in Leipzig IV', we distilled an entire decade and exhibited strikingly individual artistic thumbprints from the nineteen-eighties. The current presentation now shows works by Bernhard Heisig from the Ludwig Foundation and also the museum's own inventory.
Heisig's partner in dialogue is Wolfgang Petrick, whose critical realism, interwoven with surreal and dadaesque traits, was traded at the start of the nineteen-seventies under the label 'D-Realism'. His visual dissection transforms the affluent bourgeoisie into degenerate monsters, their assertion of debonair self-presentation a debacle faced with the manifold deformations inscribed in the flip-side of prosperous society with all its superficial revelry. Two artists meet in 'Ludwig in Leipzig V', perceiving the world through the magnifying glass of its disastrous entanglements and unafraid to engage in indecorous haranguing and clamorous tones.
For many years, Wolfgang Petrick was among the core of artists presented in the gallery owned by Dieter Brusberg, which acted as a platform for GDR art. Petrick had individual exhibitions there, as did Bernhard Heisig. And the collectors Peter Ludwig and his wife Irene were regular visitors at Dieter Brusberg's gallery. In 1987, Brusberg staged a topical exhibition under the title 'Fritz and Frederick – Prussian Pictures'. Bernhard Heisig and Wolfgang Petrick occupied central positions in this exhibition. So it is fair to say that the dialogue between their paintings already took place 25 years ago. In 2013, the Leipzig Museum of Fine Arts plays host to an encounter between paintings by Bernhard Heisig from the Peter and Irene Ludwig collection and by Wolfgang Petrick from the Ulla and Heiner Pietzsch collection.
www.mdbk.de