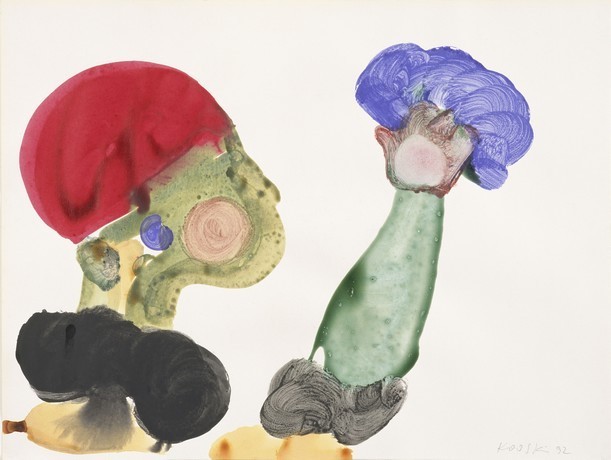 The exhibition presents work on paper from the Deutsche Bank Collection, featuring 32 contemporary artists with biographical links to Saxony.
While the spectrums of topics that the artists cover – among them Gerhard Richter, Imi Knoebel, Blinky Palermo, Georg Baselitz or Neo Rauch - do vary, they also reveal correspondence: the critical appraisal of German identity and history, visions of modernity, the ideologically charged clash of images between East and West, between figuration and abstraction. Whether in the early works by Eugen Schönebeck, the scathingly ironic 'Stasi Series' by Cornelia Schleime or the architectural studies by Eberhard Havekost, cooled down to freezing point – the contagiousness of the question as to how art and artists approach (German) reality arises time and again. The exhibition is divided into six chapters, grouped around formal aspects and contents and refraining from any historical-chronological presentation or a delimitation between schools and trends.
The section 'Heroes/Antiheroes" starts the exhibition off. In it we encounter the pandemonium of monsters and heroes with which Georg Baselitz and Eugen Schönebeck responded to the suppressed Nazi history in the early nineteen-sixties; we also see the musty odour of the economic miracle years, the answer to Icarus, fallen and ascending once more, the last painting in 'Suite 89' by Wolfgang Mattheuer. This section is equally dedicated to artists who addressed heroic, historic, and ideologically charged motifs, heroes, antiheroes and losers. Among other things, the chapter 'Codes' features work by A. R. Penck, whose perceptions of the world draw on prehistoric art as much as mathematics, cybernetics and theoretical physics. Or Via Lewandowsky's series of crayon drawings, created in 1987 in the style of a diary. Artists inspired by the Russian avant-garde, constructivism and geometric abstractions are united in the section 'On Cold Ground'. In addition to Hermann Glöckner we find Imi Knoebel and Blinky Palermo here, influences to the Leipzig painter Kaeseberg, for example. Ranging from Hartwig Ebersbach's performative, expressive Kaspar series to Eberhardt Havekost's cool "user interfaces" of the everyday world: the chapter 'Affect/Gesture/Control' centres on the handling of affectively-charged gestures in contemporary German painting. Intensity and spontaneity symbolise expression, outburst and freedom. The section 'Spatial Entities in Colour' presents corresponding works that thematise both the colour and also the fluid points of transition between abstraction and figuration. In the selected pieces by Uwe Kowski, Ulf Puder or Jörg Herold, colour describes delicately or aqueously formed bodies, spaces and pictograms.
The conclusion is found in 'Nachbilder' (English: after-images, also reproductions), a term frequently used to describe the work by Gerhard Richter – as reproductions of the collective German memory. Equally, though, these reproductions thematise imitation and reception of media images and photographic recollections in the form of conceptual painting.
'Saxony. Works from the German Bank Collection' not only presents Saxony as a transformative place of production and discourse for modern art in the nineteen-nineties. The exhibition attempts equally to sketch a coordinate system for contemporary German art, visualising topics and questions that to this day have lost nothing of their urgency.
www.mdbk.de