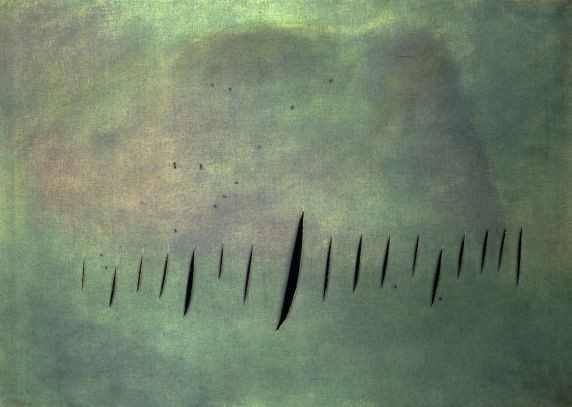 Destroy the Picture: Painting the Void, 1949–1962 focuses on one of the most significant developments in contemporary abstract painting: the artist’s literal assault on the picture plane. Responding to the physical and psychological destruction wrought by World War II—especially the existential crisis resulting from the atomic bomb—artists ripped, cut, burned, and affixed objects to the canvas in lieu of paint. Destroy the Picture emphasizes this internationally shared artistic sensibility in the context of devastating global change and dynamic artistic dialogues, offering an innovative and expansive view of art making in the postwar period.

As artists from war-torn countries like Italy and Japan—including Lucio Fontana, Alberto Burri, Kazuo Shiraga, and Shozo Shimamoto—channeled their ruined surroundings into artistic form, artists throughout the world—such as Yves Klein and Niki de Saint Phalle in France, John Latham in the United Kingdom, Robert Rauschenberg and Lee Bontecou in the United States, Otto Müehl in Austria, and Manolo Millares in Spain, among others—pursued similar approaches and strategies. Destroy the Picture presents an opportunity to reconsider the profound repercussions of this remarkably coherent approach in painting, from artists’ early experiments with translating gestures into materials to their emphasis on a rupture between two and three dimensions, as well as the expansion of the painting medium to incorporate performance, assemblage, and time-based strategies. In many cases, the exhibition places the work of now-established artists back into the radical context in which it originally emerged.

This exhibition is organized for the Museum of Contemporary Art Los Angeles by former Chief Curator Paul Schimmel and is overseen at MCA Chicago by James W. Alsdorf Chief Curator Michael Darling.
www.mcachicago.org