Everything's Here: Jeff Koons and his experience of Chicago 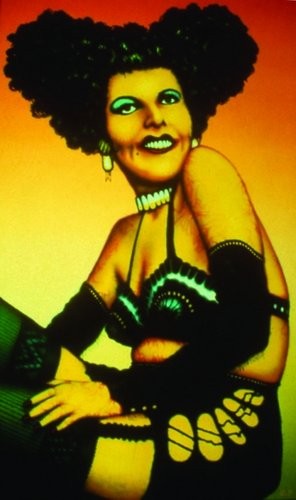 Everything's Here is an exhibition drawn largely from the MCA's Collection that focuses on the art and artists Jeff Koons was interested in and influenced by during his formative years as a young artist in Chicago.
Koons attended the School of the Art Institute in 1975-76 on a student mobility program at the Maryland Institute, where he received his BFA. His interest in the artists and art of Chicago predated his residence here, as he first encountered the work of Jim Nutt in his MCA-organized 1974 exhibition at the Whitney Museum of American Art in New York. Especially important to Koons was the work of and his personal relationship with Ed Paschke, often considered the most prominent of the generation of Chicago-based artists who are collectively known as the Imagists. H.C. Westermann was also an inspirational figure to Koons, and his woodblock print The Dance of Death is featured in Koons's Elvis, 2003.
Other artists in the show include Roger Brown, Robert Lostutter, Jim Nutt, Karl Wirsum, and Christina Ramberg, all with works of the 1970s, often considered the heyday of the Imagists. The exhibition is organized by MCA Curator Lynne Warren
www.mcachicago.org