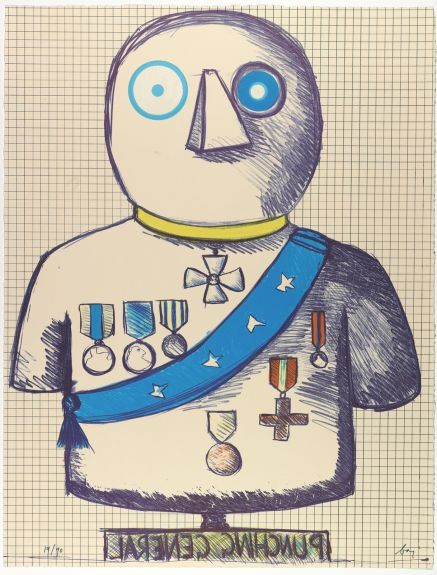 On the occasion of the forty-fifth anniversary of the founding of MCA Chicago, First 50 delves into the history of the museum’s collection. The exhibition constructs a narrative of the first fifty objects that entered the MCA Collection, in all their eclecticism, organized in order of acquisition.

The story of the MCA Collection begins in 1968, a year after the MCA opened its doors to the public. Initially, the director Jan van der Marck had envisioned a non-collecting institution whose emphasis would be the presentation of temporary exhibitions. However, in a gesture that would irrevocably alter the course of the museum’s future, the Venezuelan artist Marisol donated her sculpture Six Women (1965–66). She insisted that the MCA accept her gift, and so, against the wishes of many, the permanent collection was born. First 50 begins with that fateful artwork, and is followed by acquisitions between 1968 and 1974, including works by widely recognized artists such as Enrico Baj, Alexander Calder, and Chuck Close; works by artists somewhat overlooked by art history including the Italian Gianfranco Baruchello; and unexpected objects such as Nicodemus Nowyook’s Spirit (circa 1960), a sculpture made of petrified whale bone.

These early donations prompted the MCA to institutionalize its collecting activities. A committee of trustees formed in 1974 to establish guidelines for what could be accessioned into or deaccessioned from the permanent collection. This exhibition looks at those objects that entered the collection prior to the formation of the committee or the drafting of any collecting protocols. As the MCA’s institutional identity and priorities were refined, so too was the body of artworks held in the collection; only nineteen of the first fifty acquisitions remain. Deaccessioned works by Jacques Chemay, Henri Matisse, Bridget Riley, and others are represented by related surviving archival materials.

Such transparency about when, how, and why works were accessioned and sometimes deaccessioned illuminates the multiple players and various agendas that built the MCA. First 50 explores the project of building a collection, one achieved both by incorporating new works and by editing out works that no longer contribute to the desired overall form of the collection. The MCA Collection’s particular story speaks to the complex beginnings of many institutions by tracing the real, human forces that contribute to the building of any young museum.