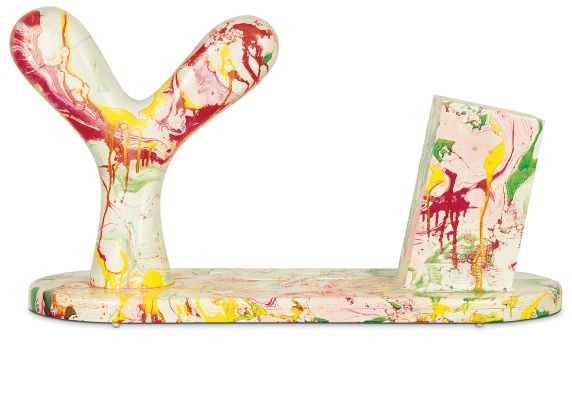 Chicago-based artist Gaylen Gerber’s practice consists largely of monochromes that he calls Backdrops and Supports. In some instances, he invites an artist to intervene on his Backdrops, layering their artwork over his own, often monochromatic painted surfaces or large sheets of paper. In other instances, he layers his Supports over the other artists’ work, sometimes literally painting over them. As a result of this exchange of creative gestures, the monochromes interrogate the still-common conception of an artwork as the discrete expression and production of an individual artist. The monochrome itself becomes a rich signifier, considering its important role within art history, which Gerber uses to explore ideas within and beyond the frame of his Supports and Backdrops. This exhibition aims to provocatively prod the imagined boundaries among art objects and the physical and social environments they inhabit in museums. In turn, the artist’s practice complicates the ways that institutions tend to ascribe value to objects and experiences in their stewardship of a permanent collection.

This presentation is the artist’s first monographic exhibition at MCA Chicago, and comprises two parts. The first component is a visually sparse, site-responsive artwork located in the second-floor lobby in which he reprises a conceptual work by artist Michael Asher. The second is a color-saturated installation containing Gerber’s Supports, panels that incorporate silver-leafed souvenirs from the exhibition Crossing Through the Colors, a work in situ by artist Daniel Buren, which are presented alongside artworks from the MCA Collection—including work by artists Richard Artschwager, Cady Noland, Jim Nutt, and H. C. Westermann—and an additional work borrowed from DAS INSTITUT (Kerstin Brätsch and Adele Röder) with Allison Katz. Asher’s and Buren’s practices in particular function as points of departure for the exchanges that characterize Gerber’s practice, and both components of this project are equally important to the connections Gerber aims to make.

In 1979, the MCA commissioned Asher to produce a work for the burgeoning permanent collection. A seminal figure in an art practice called institutional critique, Asher chose to have a selection of aluminum panels removed from the museum’s facade and presented inside the institution’s second-floor gallery. The work came with a caveat: it could only be considered part of the museum’s collection if the act of exhibiting the panels was periodically repeated. This meant reinstalling the panels on the outside of the museum once Asher’s exhibition ended, only to remove them again whenever the work was to be re-presented. The gesture challenged a host of institutional resources and unfortunately proved to be too complicated to repeat. The artwork was deaccessioned from the MCA Collection shortly thereafter.

For this exhibition, Gerber relocates a single panel from the MCA’s current facade to the second-floor lobby, where he will paint the entire space, panel included, with the white latex paint that the museum regularly uses on its walls. This deceptively simple proposition highlights the visitor’s perception of the MCA’s institutional background—both literally and figuratively—recognizing not only an important moment in the museum’s history with Michael Asher but also the much broader and longer history of artists approaching museums as sites to be interrogated and explored.

This exhibition is organized by Kristin Korolowicz, Marjorie Susman Curatorial Fellow at the Museum of Contemporary Art Chicago.
www.mcachicago.org