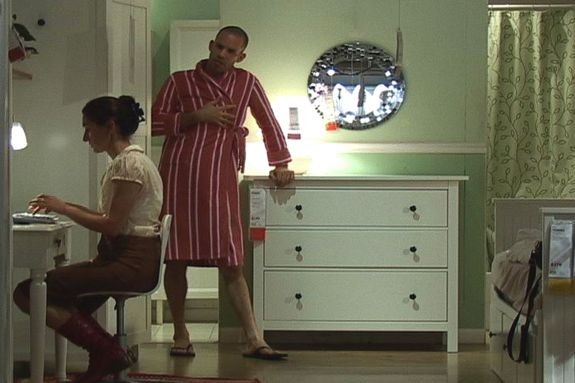 Homebodies presents work by contemporary artists who examine the space of the home, both literally and metaphorically, as an integral site for making art. Featuring an expansive range of artworks, some made of materials found in the domestic sphere and others that represent or re-create a sense of domesticity, Homebodies demonstrates a new understanding of how the domestic context has influenced the creation and interpretation of contemporary art. The exhibition incorporates various media, including paintings by Hurvin Anderson; sculptures by George Segal and Rachel Whiteread; installations by Alexandre da Cunha and Do Ho Suh; photography by Marina Abramović, Barbara Kruger, Doug Aitken, and Adrian Piper; video by Martha Rosler, Rivane Neuenschwander, and Guy Ben-Ner; and a living-room environment by Dzine that doubles as a nail salon. (To make an appointment visit the Imperial Nail Salon program page.) The exhibition is likewise international in its reach, drawing from six continents to include more than forty artists at various stages in their careers.

The domestic setting has been a crucial site (and recurring subject) of artistic production—a parallel track and occasionally a counterpoint to more commonly celebrated contexts such as the artist’s studio and the public sphere. In fact, many artists, for personal or financial reasons, work at home, and for those artists the home often becomes the subject and source of their artwork. Although this exhibition focuses on artists working from the late 1960s to the present, there are notable precedents in art history dating back as early modernism. Major artists in the nineteenth and early twentieth centuries, including Vincent van Gogh and Henri Matisse, frequently depicted domestic interiors as sites of psychological reflection and a potent metaphor for social or historical concerns. Later, in the 1970s, the feminist movement exposed the home as a site of identity production and interrogation, putting pressure on the presumably male cliché of the heroic artist creating alone in his studio. In recent years, as commerce and communication have become increasingly globalized, artists have paradoxically turned inward, examining the idea of “home” in more localized contexts, recognizing it as an arena of social development and an indicator of economic trends, especially as more and more artists confront the recent crises in housing and urban development in their work.

The exhibition is organized in three sections. The first, Architectonics, includes works that represent interiors, use fragments of private homes, or are produced on a small scale, often using humble, domestic materials. The second section, Division of Labor, presents artworks that replicate a “cottage industry” scale of production or refigure activities such as care and cleaning, and demonstrates the lasting impact of the feminist movement on artists of any gender expression. Finally, the third section, Psychogeographies, considers how private interiors can become a metaphor for interior mental spaces, oftentimes fraught with anxiety and upheaval.

This exhibition is organized by Naomi Beckwith, Marilyn and Larry Fields Curator at the Museum of Contemporary Art Chicago.
www.mcachicago.org