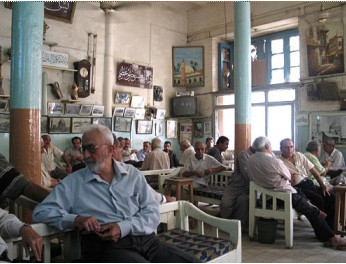 Digital photograph of Shabandar Café, Baghdad, ND. Courtesy Salon.com.
JEREMY DELLER
It Is What It Is: Conversations About Iraq

It Is What It Is: Conversations About Iraq, is a new commission by British artist Jeremy Deller as part of The Three M Project. In an effort to encourage the public to discuss the present circumstances in Iraq, a revolving cast of participants including veterans, journalists, scholars, and Iraqi nationals who have expertise in a particular aspect of the region and/or first-hand experience of Iraq have been invited to take up residence in the museum gallery space with the express purpose of encouraging discussion with visitors.
Objects meant to stimulate discussion share the gallery with the resident guest experts. The first and most significant artifact that is on display is the remnant of a car that was destroyed in by an explosion on Al-Mutanabbi, a street in Baghdad, in 2007. This tragedy killed over thirty people, and has taken on added significance because the street, named after a well-known Iraqi poet, was the site of numerous book markets and cafés, and was considered the nexus of Baghdadi cultural and intellectual life. Evidence of the violence continuing to take place in Iraq, the car is meant to ground conversation in the facts, figures, and eyewitness descriptions that have been so lacking in most information about the Iraq War made available to the public.
The second is a handmade banner by artist Ed Hall, who has collaborated with Deller in the past and is known for his work for trade unions and other interest groups. The last is a wall graphic juxtaposing two maps -- one of Iraq and one of the United States. This visual representation serves as a reminder of the disconnect between two countries that are intimately involved politically and economically, though geographically distanced. However urgently the project encourages discussion about a painful, ongoing situation, this endeavor is nonpartisan, and is unscripted and free form, and as formal or informal as each guest expert desires.
This exhibition is organized by the New Museum. The MCA presentation is organized by MCA Curator Dominic Molon. It Is What Is: Conversations About Iraq is part of The Three M Project, a series organized by the New Museum, New York; the Museum of Contemporary Art, Chicago; and the Hammer Museum, Los Angeles, to commission, organize and co-present new works of art.
www.mcachicago.org