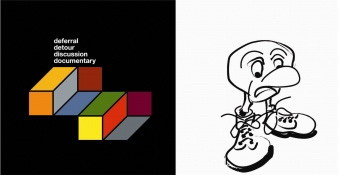 Liam Gillick emerged in the early 1990s as part of a re-energized British art scene, producing a sophisticated body of work ranging from his signature "platform" sculptures -- architectural structures made of aluminum and colored Plexiglas that facilitate or complicate social interaction -- to wall paintings, text sculptures, and published texts that reflect on the increasing gap between utopian idealism and the actualities of the world.
His work joins that of generational peers such as Rirkrit Tiravanija and Philippe Parreno in defining what critic Nicholas Bourriaud described as "relational aesthetics," an approach that emphasizes the shifting social role and function of art at the turn of the millennium. Gillick's work has had a profound impact on a contemporary understanding of how art and architecture influence, and are themselves influenced by, interpersonal communication and interactions in the public sphere.
This exhibition, presented in association with the Witte de With in Rotterdam, Kunsthalle Zurich, and the Kunstverein in Munich, is to be the most significant and comprehensive exhibition of Gillick's work in an American museum to date, representing work in various media and formats from the entirety of his career. The MCA is the only American venue for the exhibition and features work drawn primarily from collections in North America.
The exhibition has a publication that reflects the unique nature of this survey of Gillick's work. This exhibition is curated by MCA Curator Dominic Molon.
www.mcachicago.org