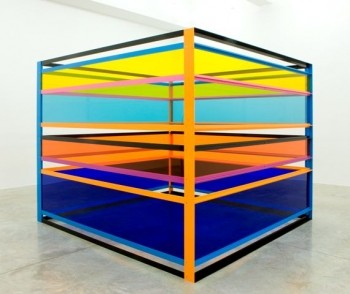 Liam Gillick
Rescinded Production, 2008
Collection Museum of Contemporary Art, Chicago. Gift of Mary and Earle Ludgin by exchange. Photo courtesy of Casey Kaplan Gallery, New York.
Liam Gillick curates a small selection of works from the MCA's collection as a complement to his major solo survey exhibition. The collection exhibition provides an institutional and historical context for the presentation of Gillick's own work while bringing an unexpected approach to presenting the collection into play. Over the past 20 years, Gillick has created a multi-dimensional body of work characterized by an ongoing study of the aesthetic aspects of social systems, focusing on how and why those aspects are produced rather than used and consumed. He emerged in the early 1990s along with artists such as Rirkrit Tiravanija, Philippe Parreno, and Dominique Gonzalez-Foerster who were similarly dedicated to developing work that focused on the contingent and contradictory nature of contemporary social relations and extended the techniques and strategies of conceptual art.
Gillick's work frequently questions the procedures and logic of institutional frameworks, an aspect of his practice that heavily informs his process of selecting and presenting works from the MCA's Collection. The exhibition reflects his fascination with the role of the collection within the museum, especially in the way that artists whose careers have developed less prominently than others are still represented in such a major institution's holdings and the circumstances involved in each case. While this sensibility provides the rationale by which Gillick selects the work for the exhibition, he also intends to reconsider the manner in which works are described and interpreted in the wall text for the exhibition by providing multiple labels for each work that tell a different story or read the work through radically different and often contradictory methodologies. The exhibition ultimately underscores the degree to which the subjectivities of curators and collectors of a specific museum have affected the seemingly objective way that the MCA's collection has been historically composed, and is continuously presented and understood.
Liam Gillick (b. 1964 in Aylesbury, England) represents Germany at the next Venice Biennale. He was shortlisted for the Turner Prize in 2002 and has had solo exhibitions at the Palais de Tokyo, Paris, and the Centro de Arte Contemporaneo de Malaga, Spain; the Museum of Modern Art, New York; and the Whitechapel Art Gallery. His work has been featured in such important group exhibitions as the Tate Triennial, the 50th Venice Biennale, and Documenta X. Liam Gillick Curates the MCA Collection is coordinated by MCA Curator Dominic Molon.
www.mcachicago.org