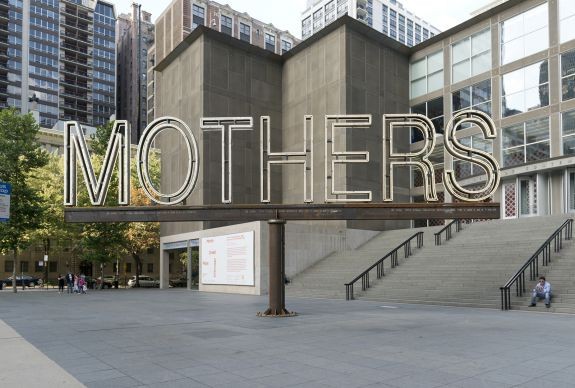 In early August 2012, London-based artist Martin Creed (British, b. 1968) debuted an ambitious new sculpture created especially for the MCA plaza. Made up of white neon lettering, Work No. 1357, MOTHERS is the largest kinetic sculpture Creed has created to date: measuring forty-eight feet wide and more than twenty feet tall, it steadily rotates a full 360 degrees. This substantial public artwork is a companion piece to the artist’s yearlong residency at the MCA, Martin Creed Plays Chicago, which blurs the lines between the inside and the outside of the museum and furthers Creed’s engagement with the city at large.

Creed often uses language in his work, spelling out unassuming words or common phrases. In some cases he works with neon on a modest scale. Work No. 845 (2007), for example—on view concurrently in the MCA’s first-floor lobby—reproduces the word “THINGS” in bright multicolored letters that are a few inches high. In contrast, the rotating neon sculpture Creed produced for the MCA plaza is intended to be monumental. As the word “MOTHERS” spins overhead, directly in front of the museum’s main entrance, it becomes a glowing presence that is both celebratory and imposing. It had to be large, Creed said, “because mothers always have to be bigger than you are” and because “it feels like mothers are the most important people in the world.”

Creed is one of the United Kingdom’s leading artists and was the winner of the 2001 Turner Prize. He lives and works in London and spends time in Alicudi, Italy. Creed’s work has been exhibited widely at a variety of international venues, and he has produced public projects throughout the world, including one in London in August 2012 to coincide with the Summer Olympics.

This is the second annual MCA Chicago Plaza Project, following the inaugural installation of sculptures by artist Mark Handforth in 2011.
www.mcachicago.org