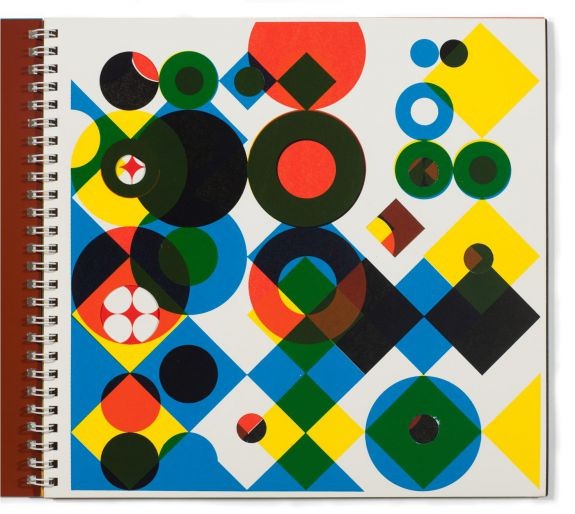 The aesthetic production of German-Icelandic artist Dieter Roth (1930–98) features numerous inventive works of art that blur the lines between artistic media, as well as poetry, music, and literary works. He is also known as a consummate collaborative artist, working famously with British pop artist Richard Hamilton. Although Dieter Roth created paintings, sculptures, videos, and sound and installation works, he is probably most widely known for his artists’ books.

In 1960, the restlessly experimental artist met the Swiss sculptor Jean Tinguely, whose legendary “self-destructing work of art,” Homage to New York, had been staged at the Museum of Modern Art, New York, to great notoriety. Tinguely’s example had a great impact on Roth. Inspired as well by the experiments of Robert Rauschenberg, who combined discarded and salvaged materials, he began creating relatively small editions of publications—now known as artists’ books. Initially Roth fashioned books out of cut-up newspapers and advertising flyers, but soon he was anthologizing materials such as his own drawings and collections of scrap and waste paper. By 1964 Roth had begun a life-long journey not only as a unique and highly innovative artist but also as a traveler, often visiting his great patron, Dr. Ira G. Wool, in Chicago, where Roth made some of the works, including Selbstbildnis as Fletscherberg (Self-portrait as glacier mountain), 1973–77, and many of the altered postcards.on view in this exhibition.

In 1984, the MCA mounted the first major US museum exhibition of work by Dieter Roth, mostly drawn from the Wool collection. Roth was fully involved in the exhibition, selecting works and designing the installation, including suspending the artists’ books on wires, to which the current installation pays homage. The artist was so delighted with the show and the resulting catalogue that he donated what was, at the time, a complete set of his books to the MCA’s newly established Artists’ Books Collection.

While at the heart of the MCA’s holdings are more than 60 of Roth’s books, the collection also features three portfolios of his lithographs—Dogs, Bats, and Trophies—and their accompanying “Speedy” (two-handed) drawings, as well as the Stempelkasten (Rubber Stamp Box), 1968, now considered one of his major works. These holdings are contextualized and augmented by works on loan from the Ira G. Wool collection.

MCA DNA: Dieter Roth is part of an ongoing exhibition series featuring works that constitute the building blocks of the MCA Collection and is organized by Curator Lynne Warren.
www.mcachicago.org