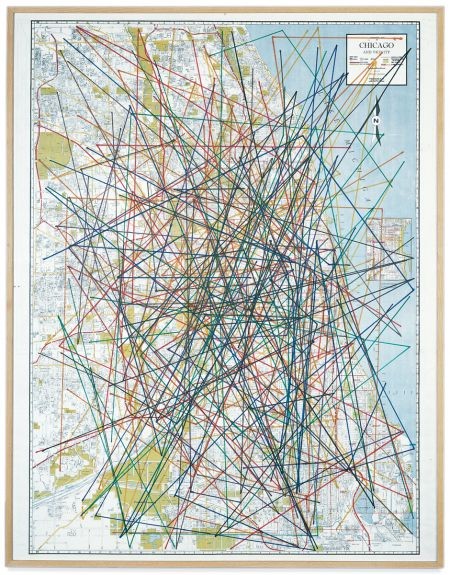 Part of an ongoing exhibition series featuring iconic works from the MCA Collection, MCA DNA: John Cage is presented on the occasion of the artist’s centenary year. It traces the fruitful and decades-long relationship between the Museum of Contemporary Art Chicago and this celebrated avant-garde composer and artist. Cage supported the museum from the very beginning, performing in a work with fellow Fluxus collaborators Dick Higgins and Allison Knowles as part of the October 1967 opening celebration of MCA Chicago’s inaugural exhibition, Pictures to be Read/Poetry to be Seen. Over the years Cage returned numerous times to Chicago, where he had lived in the early 1940s, often stopping at the MCA to execute various projects or see friends. Other artists also frequently performed Cage’s works at the MCA, notably the pioneering video artist Nam June Paik and cellist Charlotte Moorman in a 1969 program titled “Mixed Media” that featured Variations III and 26’1.1499” for a String Player.

Perhaps his best-known project associated with the MCA was part of the 1982 New Music America festival. For this pioneering music festival, administered by the MCA, Cage realized A Dip in the Lake: Ten Quicksteps, Sixty-two Waltzes, and Fifty-six Marches for Chicago and Vicinity (1978), a score created on a map of Chicago. Materials demonstrating how to interpret the score of this important work, which later entered the MCA Collection, are on view along with scores and books drawn from the more than eighty items associated with Cage in the MCA Artists’ Books Collection. Ephemeral materials, such as letters written to MCA staff and other historical documents that trace Cage’s legacy at the MCA, are also displayed.

This exhibition is organized by Lynne Warren, Curator at the Museum of Contemporary Art Chicago.
www.mcachicago.org