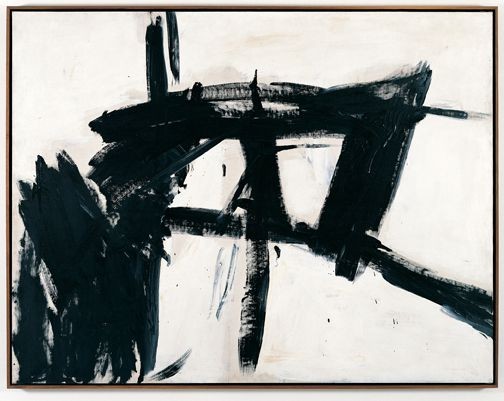 MCA DNA is an ongoing series of exhibitions designed to showcase works from the MCA Collection, bringing iconic works to light and revealing surprising wrinkles in our collecting history. MCA DNA: New York School focuses on painting and sculpture from the late 1940s and fifties, the post World War II era. Although works of this age are perhaps not typically associated with a contemporary art museum, the MCA Collection features many compelling works by some of the most prominent artists of the postwar period, including Franz Kline, Mark Rothko, Willem de Kooning, Philip Guston, and others, who are often collectively referred to as the New York School.

A few of these works have been regularly displayed in our galleries, such as Kline’s 1955 painting Vawdavitch, which will be shown alongside two of the artist’s rarely seen works on paper. Yet others, such as a moody, untitled 1969 work by Rothko, have not been on view since the opening of the MCA’s current building in 1996. As a new generation of artists resuscitates interest in abstract painting, it seems high time to present this work anew. Another fascinating work that has rarely been shown is a vibrant canvas by the Spanish-born, New York–based artist Esteban Vicente, who was a leading figure of the New York School. Sculptors are often overlooked within this group, but another rarely seen work in the collection by the underrated artist Richard Stankiewicz, Middle-Aged Couple (1954), will be featured alongside three-dimensional works by better-known artists such as de Kooning and Isamu Noguchi, reflecting the depths and strengths of our highly diverse holdings.

This exhibition is organized by Michael Darling, James W. Alsdorf Chief Curator at the Museum of Contemporary Art Chicago.
www.mcachicago.org