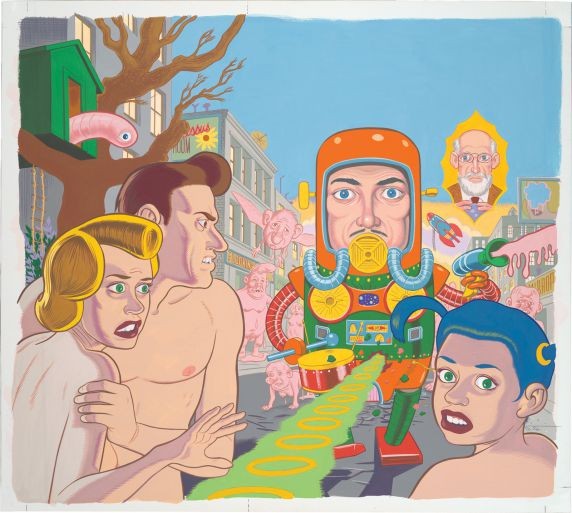 Daniel Clowes is an acclaimed comic book artist and graphic novelist—although he prefers the designation “cartoonist”—with nearly fifty publications to his credit. He is also a highly reputed magazine illustrator (and regular cover artist for the New Yorker) and an Oscar-nominated screenwriter for the film adaptation of his 1997 graphic novel Ghost World, which is widely credited with establishing the graphic novel as a credible literary form. This major survey, the first museum retrospective of Clowes’s work, presents more than 125 original drawings and artifacts in an elegant, inviting installation combining today’s graphic style with shades of a Victorian parlor. A traveling exhibition that first appeared at the Oakland Museum of California Art—the city that Chicago-born Clowes now calls home—the show will be expanded significantly for its MCA Chicago presentation.

Clowes first came to public attention in the late 1980s with his seminal comic-book series Eightball, where virtually all of his major works first appeared. The series ran through 2004, earning the artist a large following and multiple awards, and included graphic novels Like a Velvet Glove Cast in Iron (1993), an indescribable nightmare-journey through premillennial America; Pussey! (1995), a brutal examination of the comics industry; Ghost World (1997), his breakthrough hit about the last summer of a teenage friendship; David Boring (2000), a dark and apocalyptic story of obsession; Ice Haven (2005), an intricate tale of kidnapping and alienation in a small Midwestern town; and The Death-Ray (2011), the unlikely story of a teenage superhero in the 1970s. Clowes is now well known to a wide audience following the 2001 film adaptation of Ghost World and the 2006 release of Art School Confidential, written by Clowes and starring John Malkovich. In recent years, Clowes has realized the widely praised graphic novel Wilson (2010) and a serialized comic for the New York Times Magazine, a “middle-aged romance” titled Mister Wonderful, collected in an expanded hardcover edition in 2011. Original black ink and Zipatone drawings of pages from these works, as well as beautifully realized gouache paintings of the covers of Ghost World and other publications, are on view alongside originals of all of Clowes’s publications to date.