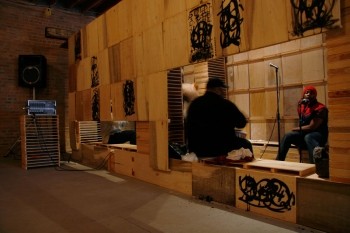 Theaster Gates's Temple Exercises is a series of exercises that occur both at the MCA and around the city. Exploring the relationships among art, politics, and race, Theaster Gates constructs a temple-like structure that merges aspects of African-American and Japanese traditions. Gates's construction also serves as a contemplative space meant to inspire dialogue across philosophical and cultural boundaries on topics ranging from politics and religion to culture, food, and art as well as a performative space for the Black Monks, a group of Baptist-Buddhist musicians who mix slave spirituals, monastic chants, and jazz to create a singular sonorous experience. The exhibition is curated by Tricia Van Eck, Curatorial Coordinator and Curator of Artist's Books, with the participation of MCA's education and marketing departments.

Gates enacts several performances in the Tribune Orientation gallery during the month of January. Led by the Black Monks of Mississippi, the performances call attention to the deep relationships between religious and cultural phenomena.