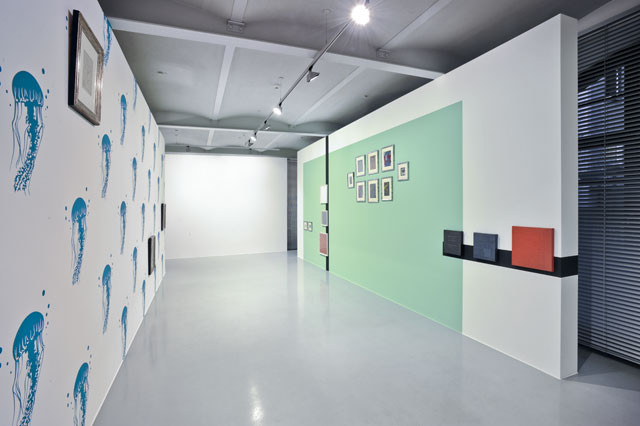 It was a hot summer day in Paris. A sign hung on the door of Galerie 1900-2000 “En cas d’absence veuillez appeler le numéro...”. I wrote down the mobile number of David Fleiss and called him from Versailles later with the suggestion: Would you be interested in taking part in the project “Berlin Paris”? David said that he was generally interested, however, he had to talk about it with his partner, his father Marcel Fleiss. He would get back to me then.
In September we were sitting together at Restaurant Voltaire to discuss our first collaboration. David was drinking Diet Coke, I was trying to stick to my Hay diet – right when Juliette Gréco entered. Apart from that, we were focused on the project and tried to think strategically what would be the best. Along the way, I found out that Marcel’s mother was born in Leipzig and that David’s a fan of Nike sneakers...
When David came to Berlin for the first time to hang his exhibition in January 2009, I took him along to Annette and Rudolf, the parents of my god daughter, for a drink. I mixed a couple of overdimensioned Gin & Tonics with nice big lemons from Tenerife, where Paul and I had spent our Christmas. David was very polite. He had a glass although he does not like gin.
This was the beginning of a fertile friendship and partnership. David works fast. He explains the works briefly and to the point, whereas I tend to hold lectures... Whenever I am in Paris, we go out to eat at least once, either on our own or along with Alexandra and Jean-Olivier. We talk about the scene and the market and we do business. Laughter is always part of it...
Back to “Berlin Paris”: In 2009 the show in my Berlin space was all about German artists, who worked in Paris between 1920 and 1960. In contrast, I showed current sculptures from my programme in Paris. 2010 was the year of solo presentations by Francis Picabia in the Invalidenstraße and by Gerold Miller in Rue Bonaparte.
This year we decided to give the cards a shuffle. In Paris and in Berlin we will be showing the artists of the galleries together: Pictures by Jean Dubuffet, Natalia Gontcharova, Adolphe von Harbou (cousin of Thea von Harbou), Francis Picabia and Edda Renouf will be hanging on wall paintings by John M Armleder, Sylvie Fleury, Mathieu Mercier and Gerwald Rockenschaub in “Au pied du mur” in Berlin.
In Paris – under the title “Sur un piédestal” – we will be showing an exhibition with small sculptures: From Carl Andre to Gitte Schäfer, from Marcel Duchamp to Sylvie Fleury, one will find artists from both galleries, who have an affinity for small-scale sculptures.
If there will be a fourth “Berlin Paris”, we don’t know. The French ambassador, Bernard de Montferrand is leaving Berlin soon, and Cédric Aurelle will be going away as well. The two have originated and organised something amazing. But the best part about it is that through “Berlin Paris” friendships were created, professional as well as personal ones. Merci! Oh, by the way, when I first called David, he was taking an afternoon nap in Ibiza...