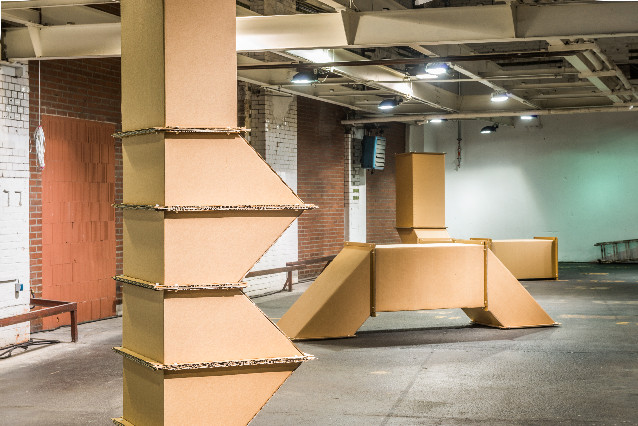 Charlotte Posenenske’s work is steeped into the legacy of modern art. Interested in landscape through Cézanne’s paintings, she develops her sense of composition, spatialisation and standardisation with the Soviet and Dutch avant-gardes. This brought her to develop from the mid 1960s a new body of works, including her reliefs and square tubes. The consumer, as referred to by the artist, is free to install them autonomously, without any given instructions. Recently rediscovered, Posenenske (1930 – 1985) was active in Germany during the 1950s and 60s. Considered as a key figure between Minimal and Conceptual Art, she has been influencing younger generations with her concept of modularity.

As different as their approaches may be, Saâdane Afif, Gerold Miller, Gerwald Rockenschaub and Luca Trevisani have something in common: they mostly work in the field of sculpture, whether by using recognizable shapes such as Miller and Rockenschaub, or through the constant research of new forms and phenomena carried by Afif and Trevisani.

Luca Trevisani uses elements from the Series DW Vierkantrohre to build a passageway reminiscent of the 1960s utopian architecture. Like a spaceship made of cardboard, the work fills almost the entire room.

Gerold Miller hangs fours Series B Reliefs on a black wall, in a composition which is not dissimilar to his own works from the series set.. Like an open frame, the reliefs define an imaginary visual space where foreground and background seem to merge.

Gerwald Rockenschaub’s installation of Vierkantrohre seems to have been randomly thrown on the gallery floor. The elements are loosely piled up, instead of being assembled, emphasising their industrial aesthetic. The different shapes can be interpreted as a kind of characters within a graphic alphabet, which Rockenschaub uses to build his own language.

Saâdane Afif’s composition uses different yellow Series B Reliefs. The starting point is the concept of sequence, both in musical terms, and referring to André Cadere, whose works are often quoted by Afif. Each vertical row consists of three elements which can be read as a sequence. Thereby, Afif plays with the Barres de bois rond, with which Cadere developped his theories on modular sequences, just like Posenenske.

We would like to thank the participating artists and Dr. Burkhard Brunn.
www.mehdi-chouakri.com