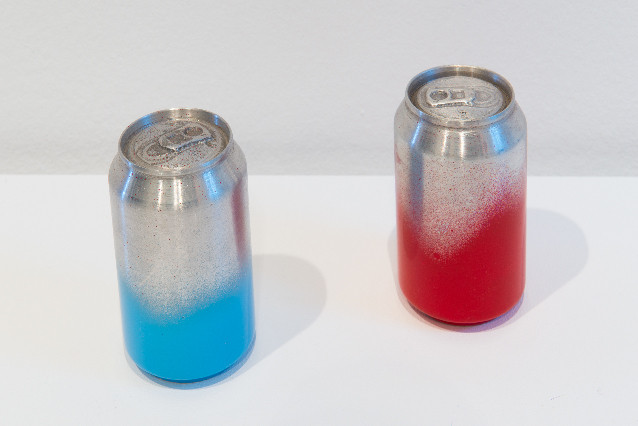 The industrial form likes the cut-out, likes being selected, reproduced, distributed – to the four winds. To achieve this it relies on offcuts. In the wings these shadow-like counterforms are reborn as actors and extras on the taut copper of metallic canvases, as ectoplasms of the productive unconscious. Sprayed and stencilled, a dash of blush arrays them on the screen in a genial performance. These ghosts of productivity flutter to a silent melody in a Quality Street art deco ambience. François Curlet

Mehdi Chouakri is pleased to present a solo exhibition of French artist François Curlet, the second part of a two-venues show split between Paris and Berlin, in collaboration with the gallery Air de Paris (January 15 – February 27, 2016). In an attempt to question the usual exhibition format, the artist extends the concept of the white cube.

The starting point of Frozen Feng Shui is the Chinese philosophy aiming at harmonizing people with their environment, in terms of "invisible forces" binding cosmos, the elements, and humanity together. Preceded by the adjective frozen, this traditional concept is transformed into an industrial product, shifting from metaphysics to take-away. This translation is symptomatic of François Curlet’s work, which is marked by a recurrent dualism, for instance between industry and craftsmanship, or conscious and unconscious. The bridges he builds between categories invite the beholder to reflect on the real nature of objects. The works in Frozen Feng Shui are not what they seem, evoking a poetry of everyday where the truth lies in the details.

Both series of paintings on display, Speculoos and Chipster, consist of copper sheets mounted on a wooden support. The works seem manufactured, but a few marks and scratches reveal an artisanal production process, as counterpoints to the minimalist composition. The colours are spray painted on the copper surface using stencils, the subtle turquoise gradation of the Speculoos series contrasting with the graphic leaf-like pattern of the Chipster paintings. The stencils used by François Curlet are actual steel offcuts originating from industrial production. These are the negative of mass produced items, the leftovers of our consumer society. The artist refers to them as ghost shapes, coming back from a limbo where they were meant to be discarded. In a Freudian perspective, offcuts could be interpreted as the unconscious of industrial objects, and, in a broad sense, the unconscious of our society. François Curlet does not create these works as actual paintings, but rather as generic depictions of the idea of painting, how they must appear in order to fit in that category. Throughout this process, they seem manufactured items, ready-mades, and are as well labelled as such, their titles referring to the food industry.

For the series Hot/ Cold, the artist turns inside out the concept of ready-made. These aluminium cans could be produced in a factory, but each one is a unique piece handcrafted in Mali, showing specific marks from the original form. Ambiguously, the sculptures look like real cans and are made of the same material, making them hybrids between a sculpture and a ready-made (first mentioned by Marcel Duchamp a hundred years ago, in 1916). Each pair is painted red and blue, referring to a tap just as the title, but in different shades of cyan and bordeaux. The artist gently shifts the cans from the everyday to the realm of art, by almost pretending not to, whilst subtly playing on the concepts of high and low.

François Curlet (born 1967 in Paris) lives and works between Paris and Brussels. His works have been exhibited at Palais de Tokyo in Paris, Le Plateau/Frac Île de France and the Regional Centre for Contemporary Art in Sète, and belong to major public collections, such as Centre Pompidou in France, Tate Modern in England, Grand Hornu in Belgium and the Van Abbe Museum in the Netherlands. Upcoming shows will be held at MuHKA in Antwerp and BOZAR in Brussels amongst others.

On the occasion of the opening reception, the book Speed Limit, will be presented. It is the artist’s most recent publication, depicting the transformation of the iconic Jaguar type E into a hearse. The book is edited by Editions BHV, Berline-Hubert-Vortex and Cyrille Putman, Paris.
www.mehdi-chouakri.com