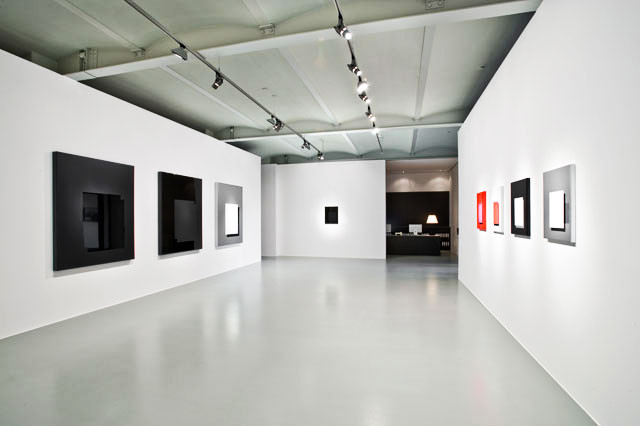 Set., the newest exhibition by Gerold Miller is opening on March 3. The show will present a new group of works by the artist, who departs the three-dimensional “frame-like form“ for the first time.
The relief, which has been typical of him so far, remains in the background, and as a result a new window opens up to geometric abstract painting. Miller focuses on a quiet, clear, minimal composition of two overlapping rectangular colour fields in his new series. The experiment swings between shade in shade and high-contrast associations and let the colours take on a main role. This play is counteracted by the rigor of the identical arrangements. This results in an optical colour effect, which is reminiscent of Joseph Albers‘ “Hommage to the Square“ for instance. The strategy of repetition is quite explicit in Minimal and Conceptual Art. The eye and its own aesthetic sense are being challenged, not only through the direct, industrial and chromatic appearance.
Miller‘s titles, such as instant vision, total object or hard:edged, usually define the work series as well as the indiviual works. Their slogan-like quality enables them to form a bridge to the viewer. With the new work group title Set., there are accordances to Miller‘s mode of working, like his precise compilation of form, surface area and colour.
The hanging of the exhibition deliberately emphasizes this contrast-enhanced play. A series of seven works in different sizes (60 x 48 x 3 cm and 160 x 128 x 8 cm) await the visitor in the front space. In the second smaller room one is confronted with the dominating over-dimensional Set. 1 (250 x 200 x 10,8 cm). Thus, the viewer experiences a shift in scale and weight, which almost seems menacing. In opposition to this, one encounters smaller works (60 x 48 x 3 cm) and also a special silkscreen edition (Edition of 50 works).
Gerold Miller‘s works have been represented in renowned museums and collections worldwide for years. Just recently his series of large format works have been acquired by the Louisiana Museum of Modern Art and the Kunstmuseum Stuttgart.
Currently, his works can be seen in the exhibiton Hirschfaktor at ZKM Karlsruhe and they are also part of the Highlights from the Daimler Art Collection at Museo Santa Guilia in Brescia, Italy. The Kunstmuseum Stuttgart and the Louisiana Museum of Modern Art will be showing the newly acquired works in May for the first time. The publishing house Distanz Verlag in Berlin will release the artist‘s first comprehensive catalogue raisonné in April.
www.mehdi-chouakri.com