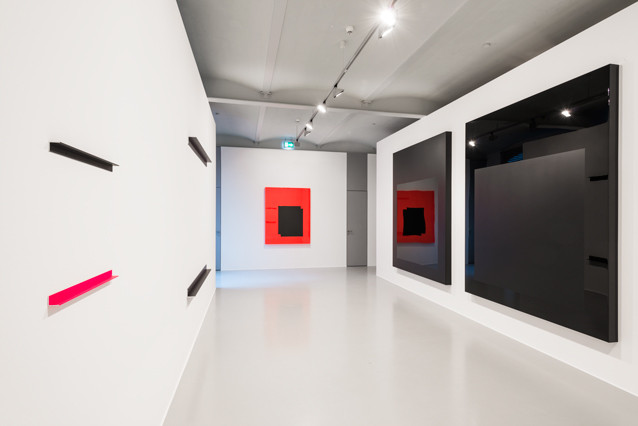 For the tenth edition of Gallery Weekend Berlin, Mehdi Chouakri opens on May 2, 2014 a solo exhibition by the Berlin based artist Gerold Miller, titled Monoform.

Monoform is a new series of works which take inspiration from Miller's early works of the 1990s, and are to date the most wide reaching steps taken on Miller's path to differentiate himself from the traditional format of the 'painting'.

The Monoform works stretch the traditional understanding of the 'picture' to its extremity. Mounted parallel on the wall, the two equally proportioned aluminum angles describe the boundaries of an imagined picture-space: the wall becomes a painting, and its borders become the object. The discovery of the picture-space is left to the imaginative power of the viewer. Gerold Miller nominates the wall as the 'final ground', over-stepping previous borders between abstract painting and minimalist sculpture to broaden the categories of the conceptual.

The second group of works shown belong to Miller's set. series, in which he tests the limits of representation. These works operate at the margins of plane and space, light and dark - or more precisely, at the margins of the visible. Large-scale black monochrome surfaces absorb the viewer's gaze, the contrast of flat matt and lacquer gloss giving rise to illusionistic new spaces behind the picture surface. Overlapping areas of color draw the viewer out into new simulated spaces, which interplay and feedback to the surface.

Monoform and set. both represent Gerold Miller's ongoing occupation with a radically reduced understanding of pictoriality, which he has formulated throughout his artistic career. Specifically this engages with a process of systematic reduction of the creative medium to give rise to an ascertainable picture form.