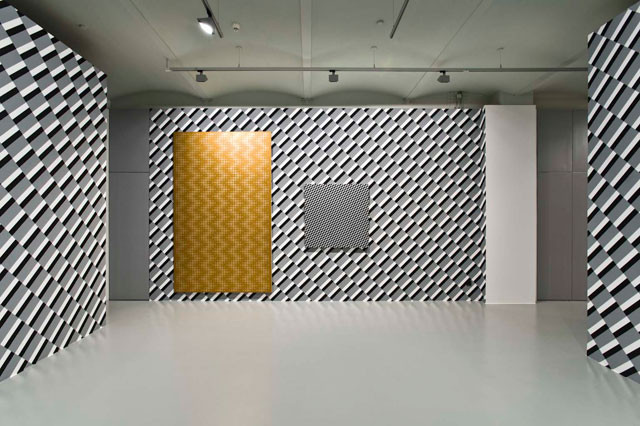 Three weeks later multiple pages arrived in the fax machine with sketches for the new paintings.
Within an hour we found a studio space in a 1960s building in Wedding, in which artists work. We were able to order the necessary special metal stretchers and the canvas only from Switzerland. Running out of time, we had them sent unmounted by messenger, but due to the Easter holidays and customs clearance, the delivery took much longer than planned. Pierre got to work immediately: mounting, priming, painting, The grid composition runs either horizontal or vertical. Dots or rectangles, two-toned or in different color gradations. They cause optical effects and they seem to be moving at closer view.
Since the 1970s Armleder has been engaging himself with geometry, however, in an undogmatic way, more concerned with the “visual material“ of his art. Similar to his expressive-elegant “Pour Paintings“ or “Puddle Paintings“ series. John M Armleder (*1948 in Geneva) gained recognition as an artist with his concept of bringing objects from everyday and art history together and declaring them as instruments of his art. For him there is no classification in terms of “quality“, they just result from a conflation of cultural sub-phenomena, such as deco products or B movies. His oeuvre encompasses paintings, sculptures, large-scale installations, as well as an immense group of wall paintings. Two of such wall paintings can be viewed in our exhibition.
In the meantime Pierre is getting some help in the studio. Jean-Baptiste and Anne-Cecile are supporting the production of the 11 paintings. The wall paintings at the gallery take a lot of time, despite their seemingly simple composition with diagonal rectangles. They partially stretch over the entire wall, but they finish in the middle of the opposing wall...
Meanwhile it‘s the evening of April 22, John arrives at Tegel, where I am waiting for him. His oversized Rimowa suitcase is almost empty, he only brought it along to have it repaired at the Rimowa shop on Meinekestrasse. Now we are counting down to the exhibition. Just a few days to go until Gallery Weekend starts. Most of the paintings are done now, but the wall painting remains the biggest challenge for Pierre, Anne-Cecile, Xavier and Isabelle.They work hard to get everything looking perfect and done on time. On Monday John and I are at the new Planet Modulor, a specialty store for creative areas such as architecture, design and decoration. We find a room divider by Oziol, which we might integrate in our next exhibition. At the neighboring Minimum, a design shop, John discovers a colorful carpet by HAY which is made of small chubby wool balls made in Nepal. Combined with the large grid painting it will form a “Furniture Sculpture“.

We drive to the gallery with our loot, where the young team is eagerly waiting to meet John. There are also the two large metal slides that have been just delivered. Together with the silver-pink dot painting sized 280 x 170 cm it will become another composition. In the evening John and I go to the new Pauly Saal: a light meal and a good atmosphere. The next day John would like to go to KaDeWe and look at silk flowers, this we plan for the early afternoon. For almost three years my computer, my IPad and my Iphone ring daily at noon with the same ICal notification: John. Sylvie and I have set this up together to send him good thoughts for a quick recovery when John was seriously ill in the hospital. He is doing much better now, but I just can‘t get myself to delete the ICal-reminder. This week it reminds me that I have to call him at 12pm at the Hotel Bristol, before that it‘s too early for him. I pick him up around 4pm and we go to get the artificial flowers. We do not find the department right away, it has been temporarily moved because of a remodeling, but our saleswoman, Mrs. Ohnesorge, takes care of us well and we find everything very quickly. Afterwards we go to the Idee Kreativ Markt and buy chains, tapes and other different materials that John would like to use in his next paintings.
It‘s Thursday April 26 in the meantime. There are eight people working on the wall paintings by now.
Unfortunately, there have been some complications, but everything needs to be finished by the evening. My ICall is ringing and I have to call John, who wants to give me the last directions regarding the hanging of the works. He would like to title his works after names of casino games. Years ago he had sent me a postcard of a casino on Potsdamer Platz, which he had taken to Geneva.
The catalogue for the exhibition will be printed after the Frieze Art Fair in New York, where we will take part with a solo presentation of works by Saâdane Afif.