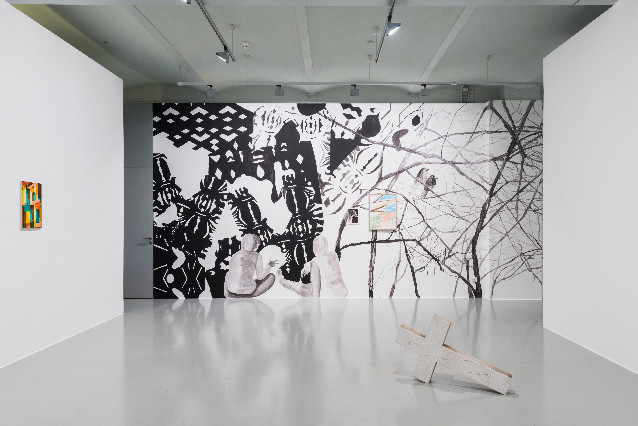 Galerie Mehdi Chouakri is pleased to present the exhibition Salvo è vivo, an homage to the artist Salvo who passed away last year, on September 12. At the time, an exhibition of his works was planned, and the idea of paying him a tribute came naturally.

Salvo was born Salvatore Mangione, 1947 in Leonforte, Sicily. Active since the late 1960s, he rapidly developed a singular work which bypassed the contemporary dogmas. Considered to some extent an early member of the Arte Povera movement, his style changed radically as he turned to figurative painting in the 1970s. This position set him as an outsider against the artistic trends of the time. Salvo stood firm, keeping on exploring conceptual art through unexpected figurative means, and contributed to establish painting as a medium in its own right. The exhibition title, Salvo è vivo is derived from a work that shows these words on the front and “Salvo è morto“ on the back. Identity was a central theme throughout his career, expressed using neons, photographs or marble alike. For instance, his participation in the Harald Szeemann’s 1972 Documenta 5 only consisted in his name printed in the catalogue.

Salvo’s legacy keeps on inspiring and influencing many artists. His unique artistic attitude is widely respected by colleagues of his own generation – from Giulio Paolini to John Armleder – as well as by younger artists. Some works in the exhibition show strong affinities with Salvo’s aesthetics, some others are closer to his approach, but they all are characteristic of each artist.

In the first room, Haris Epaminonda’s found photographs represent timeless reflections on fundamental themes such are here and there, now and then. For instance, her researches brought her to use images of ruins or idealistic landscapes. The painter Bernd Ribbeck creates architectural structures based on geometric shapes in his very own color palette, in compositions that remind Salvo’s vistas. Quotation is central to Jonathan Monk’s work, who cites Marcel Duchamp’s epitaph on a found tombstone lying in the gallery space, referring to the words Salvo è morto. Francesco Vezzoli’s painting is also an appropriation, based on Salvo’s Self-portrait as Raphael.

Claudia & Julia Müller show a wall painting spreading over the two rooms. In this sequence from a larger work, black strokes merge abstract and figurative shapes in order to unveil extraordinary perspectives in front of their self-portraits, seen from the back.

Douglas Gordon & Morgane Tschiember propose another kind of self-portrait, taking the shape of a carbonized wing, a wistful evocation of Icarus, along with other allegorical symbols such as wax and a bat. Salvo was a passionate traveller, and his numerous journeys were an important source of inspiration. This side of his work is embodied by Saâdane Afif’s piece, the embroidery is crafted in an traditional Central Asian technique.
The gallery would like to thank all the artists in the exhibition, as well as their respective galleries: Peter Kilchmann, Norma Mangione, Meyer Riegger, Franco Noero, and Rodeo.
www.mehdi-chouakri.com