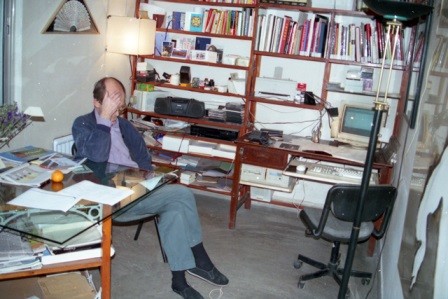 Dai Hanzhi: 5000 Artists is dedicated to the life and work of Dutchman Hans van Dijk (1946 – 2002). The exhibition outlines his seminal role in Chinese contemporary art. Van Dijk, whose Chinese name was Dai Hanzhi, was active as a curator, art historian and gallerist in China throughout the nineties. Though hardly known in the Netherlands, Van Dijk is still revered by Chinese artists today.
Dai Hanzhi: 5000 Artists includes historical installations, paintings, video, and photography by artists who were close to Van Dijk. A number of artists, including Ding Yi, Liu Ding, Ni Haifeng, Wang Xingwei and Zhang Peili, created new works or proposed a personal selection from their oeuvre. The works on view are supplemented by rare archival material from Europe and China, including letters, photographs and unique “Ming-inspired Rietveld-style” furniture made by Van Dijk in the early ’80, as well as a digital presentation of Van Dijk’s hitherto undiscovered life’s work, a lexicon of 5000 Chinese artists born between 1880 and 1980. Two contemporary art spaces that have been profoundly influenced by Van Dijk’s model for a gallery and archive, Vitamin Creative Space (Beijing – Guangzhou) and BizArt (Shanghai), will also be present with their own contributions.

Exhibition curator Marianne Brouwer notes: “There has been a longstanding awareness of Hans van Dijk’s importance to the art scene in China—as a curator and a dealer, creating relations between art in China and the Western art system, particularly in the early nineties. Finding the lexicon has decisively changed the way in which we must consider his legacy. In this exhibition, we are showing a digital version that Hans created, though he also designed a book he meant to publish in print form. We are now well on our way to setting up a foundation to maintain his legacy, and one of our first concerns is to research and unpack the lexicon but also to see through the possibilities of having it published.”

Witte de With Director Defne Ayas describes her motivation behind Witte de With’s dedication to Hans van Dijk’s legacy: “When living and working in China (2005-2012), it struck me how so many of my peers and colleagues – artists, curators, and gallerists alike- all spoke so fondly of Hans van Dijk, acknowledging him as a mentor and an important influence on their own respective practices.” Upon joining Witte de With, Ayas realized that the Center had only worked with one artist from China in its twenty-four-year history (the late Chen Zhen was invited by Daniel Buren in 1994) and set about to change this. “When noted Dutch curator Marianne Brouwer approached us with her research and exhibition plans around Hans van Dijk, we immediately said yes.”

As a result of the Van Dijk exhibition and in an extension to the program, Witte de With will enable the establishment of a foundation committed to the research of art in China, dedicated to the legacy of Hans van Dijk. “The foundation will provide an effective means of giving back, while creating a more meaningful and enduring connection with the program,” explains Ayas.

About Hans van Dijk
Long forgotten in the Netherlands, Hans van Dijk (1946-2002) began his career as an artist studying at the Arnhem Arts Academy and at the Eindhoven Design Academy. He took an interest in Ming furniture and decided to study Chinese language and culture. In 1984 Van Dijk left the Netherlands for China, where he passionately devoted the rest of his life to documenting, archiving and promoting the work of Chinese contemporary artists, until his early passing in 2002.
Hans van Dijk acted as a teacher, curator, dealer, and scholar in a time when art infrastructure in China was virtually nonexistent. He taught artists how to manage themselves and the minutiae of the art world: how to curate and have their shows curated, pack artworks, fill out loan forms, and show to local and international collectors. Critically, he was one of the first to view these artists within their larger context, both as a continuation of Chinese art history and as a part of international contemporary art practice. Van Dijk despised the label “Chinese contemporary art” and similarly post-colonial attitudes, encouraging Chinese artists to see themselves as equal contributors to a global cultural dialogue.

Hans van Dijk was instrumental in launching the careers of many important artists and in generating early international interest in Chinese contemporary art. He studied Mandarin and Chinese art history in Nanjing from 1986 until 1989, during which time he traveled around China visiting exhibitions and meeting artists. Once he returned to the Netherlands in 1989, he began promoting Chinese artists to a continental audience, culminating in the seminal China Avantgarde exhibition at Haus der Kulturen der Welt in berlin. Van Dijk returned to China in 1993 to immerse himself in the Beijing art scene, and in 1994 he founded the New Amsterdam Art Consultancy as an umbrella for his exhibitions, writing, and dealership.

The 1990s saw the scholar undertake many curatorial and business projects with mixed success. He organized several exhibitions of Chinese art in Europe, especially in Germany. Hans van Dijk was at the helm of the Central Academy of Fine Arts Gallery for a mere six months in 1996, managing to put on six of the greatest shows of his career at a breakneck pace. In 1998 he co-founded the China Art Archive and Warehouse, van Dijk’s first commercial venture, with Ai Weiwei and Belgian collector Frank Uytterhaegen. The Archive contains detailed information on more than 450 Chinese contemporary artists and thousands of documents on the history of van Dijk’s exhibitions both in China and abroad.
Yet these career triumphs were marred by frustration. Van Dijk was a mediocre businessman, more focused on what was vanguard than what was sellable. Official protest sank his landmark 1997 project Face to Face, a three-part collaboration with Siemens that would exhibit Chinese and German artists together. During the late 1990s, several of van Dijk’s closest artist friends left his stewardship for more commercially successful dealers, while an influx of foreign curators diminished his role in Beijing. Yet despite this, Hans remained a beloved mentor and leading academic for a generation of Chinese artists up until his death in 2002. As Wang Guangyi posited, “If Hans were alive today, his space still running, I think he would be the most important figure in contemporary Chinese art. Not as a dealer, no, but as a scholar, able to influence the entire discourse of art.”
www.kunstinstituutmelly.nl