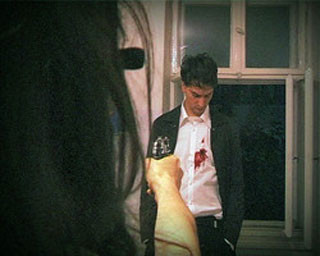 Witte de With presents three films by Keren Cytter: Something Happened (2007, 8 min), Der Spiegel (2007, 4 min) and Nightmare (2007, 7min). In addition, Cytter’s feature-length film New Age (2007, 75 min) will be screened during the opening and on Saturday 15 March at 4:30 p.m.
Opening Saturday 1 March, 6 – 8 p.m.
Exhibition opening with an informal introduction by Keren Cytter and Willem Oorebeek prior to a screening of Keren Cytter’s New Age.
Cytter’s films reveal a fascination with human behavior and psychology, often focusing on a couple in a claustrophobic, domestic situation. Although her storylines are highly dramatic, the characters’ facial expressions are often deadpan, creating a jarring disjunction between acerbic language and its passive delivery. “You will never have me. You will never fuck me” murmurs one of her characters, as she caresses the man she is rejecting.
Cytter’s work analyzes the way in which mainstream films are constructed, the narrative devices they employ and the editing tricks that sew a story together. Her characters refer to these, commenting upon their own subtitles or congratulating each other on a smooth edit. Her films also challenge chronological representations of time, with certain actions being repeated or multiple versions of the same event happening at once. The notion of memory is an important aspect in her work, both its emotional impact and its use as a story-telling device. As one character in New Age puts it: “You can’t rebuild your memory, you can only alter it”.
Initially, Cytter’s technological approach appears to be rather low-fi. Several works are filmed with a handheld video camera, she often uses her own apartment as her set, and the same group of friends frequently appear in her films. Yet the construction of her works is extremely layered and complex, including an intricate and evocative use of music, and recurring visual effects such as filming at floor level, or using the opening and closing of a door as a looping moment. Her visual language is as developed as the elaborate verbal language she uses in her scripts.
At Witte de With, Cytter’s films are screened within the framework of Liam Gillick’s solo exhibition Three perspectives and a short scenario, which has imposed an architectural meta-structure onto the gallery spaces. This meta-structure designates which rooms are to be used for the presentation of Gillick’s work and which are to be seen as “institutional zones”, for which he gave back the responsibility to the curatorial team. Witte de With has chosen to use these institutional zones to present the work of other artists, first with Manon de Boer and now with Keren Cytter.
Curated by: Nicolaus Schafhausen, Zoë Gray
www.kunstinstituutmelly.nl