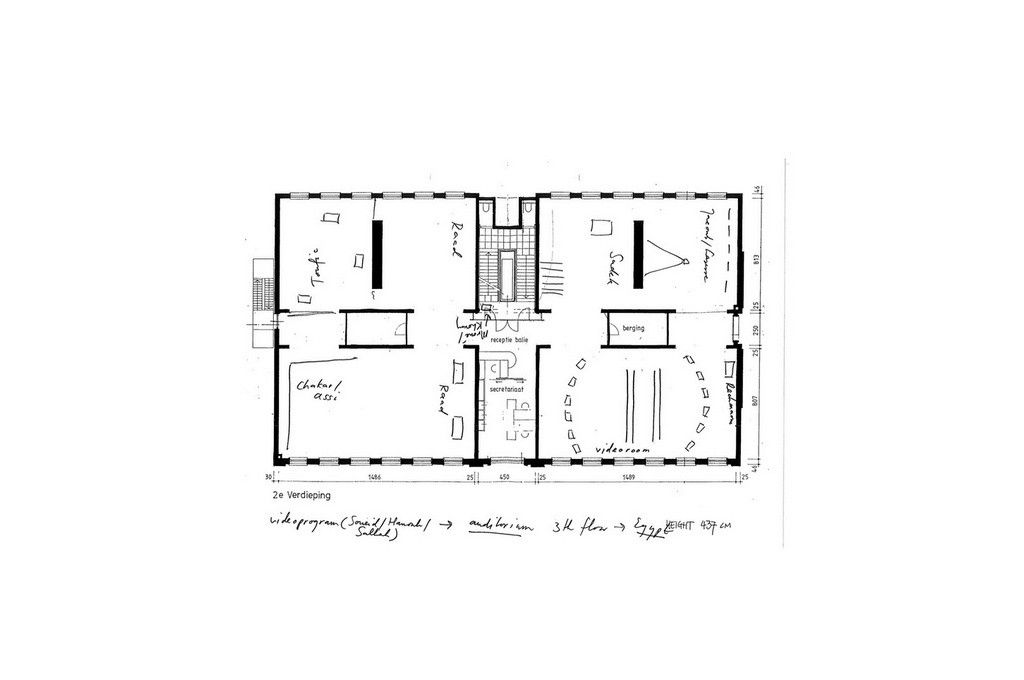 A draft floorplan for the exhibition Contemporary Arab Representations - Beirut/Lebanon, 2002
MARWA ARSANIOS
What representations?
27 May - 21 August 2016

Witte de With Center for Contemporary Art continues to examine its archive with WDW25+ Commissions running from Summer 2016 until January 2017. This commissioning series invites artists to respond to, and elaborate on, the exhibition history of the institution as a fertile ground for re-assessing and re-imagining contemporary art history.

The first commission sees Marwa Arsanios (artist and co-founder of 98Weeks Research Project) critically engage with Contemporary Arab Representations, a series initiated by former Director Catherine David at Witte de With from 2001 onwards to explore and present the activities of cultural and intellectual actors across the Arab world. Considering the series as one part of an ecology of artist, institution, market, and real estate in post-war Lebanon, Arsanios explores how the canon is formed and written into history; what informed this situation at the time (90s onward), why and how do artists get written out of certain histories? Arsanios excavates this particular period of knowledge production and validation through art historical, spatial, and revisionist feminist discourses, while mapping, re-staging, and inserting new voices in order to open up new readings.

What Representations? critically rethinks the Beirut / Lebanon program. A round-table conversation with academics, artists and writers creates a broader picture of political and social context from which the Beirut show emerged. Furthermore, Arsanios takes a cue from scripts of performances – a pre-eminent medium in the region at the time - found in the archive to create a theatrical set from which to ‘re-script’ the exhibition. This show within a show enacts the self-reflexivity of institutional archives. Lina Majdalanie’s performance “Biokhraphia”, in which she dialogues with herself in a mediation on interiority, is especially influential.

With Thanks To Mor Charpentier
www.wdw.nl