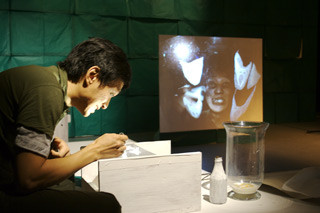 Witte de With presents a solo exhibition by New York-based artist Sung Hwan Kim (1975, Seoul). He has previously worked and lived in the Netherlands over a period of four years, including the first two years as fellow at the Rijksakademie in 2004/2005. In 2007, he won both the 2nd prize of the prestigious Dutch award the Prix de Rome and the Korean award Hermes Korea Missulsang (Hermes Korea Prize for Contemporary Art). At Witte de With, Kim will show Summer Days in Keijo – written in 1937 (2007), one of the highlights of the 5th Berlin Biennale earlier this year, as well as works from his In the Room series (2006/07) including installation versions of the videos Dog Video, From the Commanding Heights..., and Drawing Video (scary stories).

In his practice, Sung Hwan Kim integrates video and performance art, taking on the role of director, editor, performer, composer, narrator and poet. By approaching his own work from all production angles, his pieces are infused with his own highly subjective vision. His videos and performances seldom tell a linear story. His dream-like films depart from a straight-forward story, the scenes shift almost illogically with strong cuts, whilst maintaining an overall narrative and aesthetic coherence.

The In the Room series was created during Kim’s residence in Amsterdam and was partly produced for his participation in the Prix de Rome. The series offers insight into some of Kim’s working methods. As the title indicates, he mixes scenes and stories taken from his immediate environment. To Kim, every situation offers useful material and he does not search for certain props or characters, but works with what surrounds him. He “collects” his environment through the materials, objects and the people he encounters, combining all these elements in his films.

In the videos Dog Video (2006) and From the Commanding Heights... (2007), Kim creates bizarre stories mixing them with quotidian events, gossip and history, so that the account feels unreal yet entirely believable. For this exhibition, From the Commanding Heights... will be expanded into an installation including Dog Video, along with a wall drawing of chimerical images, provoked by the textual elements of the video. Parts of this drawing are from the live drawings that Kim made during his performance Pushing against the air, performed for Prix de Rome.

Summer Days in Keijo – written in 1937 (2007) is a fictional documentary about the modernisation of Seoul, which was previously called Keijo under Japanese colonial rule. The 1937 travel log “In Korean Wilds and Villages” by the Swedish ethnographer and zoologist Sten Bergman forms the guide to the film. Kim traces Bergman’s footsteps in present-day Seoul, following a Dutch female protagonist through the streets and buildings of the city. The film focuses on architecture that has been moved around in the course of time, therefore ironically losing its status as a landmark, and revealing that even supposedly constant constituents of a city can be malleable. Kim created an elaborate soundtrack to the film in collaboration with the Amsterdam and New York-based musician David Michael DiGregorio also known as dogr. The soundtrack creates a tension between the descriptive narration and a pondering voice that resonates and repeats the assumptions made by the female protagonist.

Publication: A book will be published by the end of the year, including a conversation with Sung Hwan Kim and Joan Jonas and a contribution of the artist himself about his In the Room series.