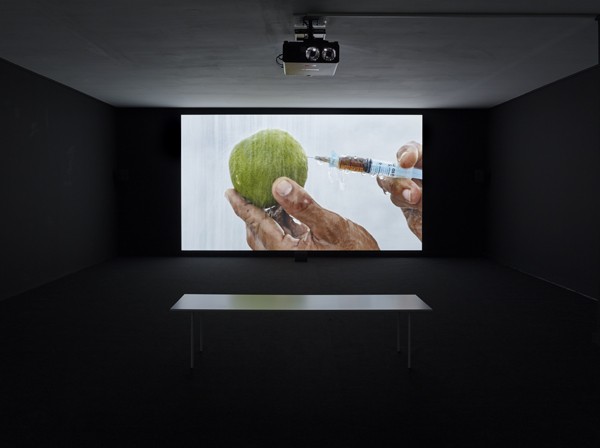 This exhibition, bringing together work by Pamela Rosenkranz, Susana Mejia, and Anicka Yi, invites us to engage with a rarely visited part of the world: the Amazon. The largest tropical rainforest in the planet, Amazonia extends over nine different countries in South America, including Brazil and parts of Venezuela, Colombia, and Suriname. Scientists have likened its ecosystem to the lungs of our planet, like a larger-than-human organ taking in, but also producing, oxygen. Similarly, as an organism, art exhibitions operate as entities that make worldviews palpable. For, historically, artists have come to picture, and make visible, unknowns. In so doing, artists probe at what an image of a place, its experience and its mediations, may come to constitute or trigger; they explore the limits of an image, and what its ends could become.

The artworks in this exhibition are uncontained: they are neither solely documents nor finite pictures. Sensually spatializing empirical and intellectual findings, these projects distinguish themselves as aesthetic matter to attest to, and be tested through, senses other than sight and reason alone. The artists created these artworks after artistic and field-research, using a range of technologies drawn from scientific, digital, and indigenous knowledges. What results, are conceptually and materially multi-dimensional art installations.

Taking its name from a substance based on ancient and abundant natural properties found in the Amazon, Pamela Rosenkranz’s work is a light, water, and sound installation. Amazon (Container of the Substance Anemine) draws on the molecular structure of ‘chlorocruorin’, a green blood derived from ringed worms in the rainforest, known to enhance the intensity of human perception. A drip introduces saline water containing “Anemine”, the medical product containing the substance, into the gallery space, creating a reflective liquid on the ground that changes it’s shape over time. Based on her perceptual experience of the Amazon, Rosenkranz conceives the light installation as a translation of the aerial view of the rainforest’s green vegetation and the blue water of the Amazon river’s serpentine-like movements. Permeating throughout the gallery, are sampled sounds of the jungle, emanating from artificial intelligence speakers of the e-commerce company Amazon.

In stark material contrast to this installation, is the hand-made work by Susana Mejía. Together with other artists, anthropologists, botanists, photographers and filmmakers, Mejía has investigated the Colombian Amazon in search of color. Drawing on ancestral knowledge in conversation with Huitoto and Tikuna women, indigenous communities native to the Amazon, eleven botanical species were identified along with the alchemical processes for the use of their pigments on natural fibers such as fique, cotton, and paper. In the artist’s over decade-long project, titled Color Amazonia, of which a large component is showcased in the exhibition, Mejía presents the results of ethno-botanical research.

Anicka Yi’s The Flavor Genome is a techno-sensual journey through the unexplored potentialities of adaptation, mutation, and hybridization of living organisms. Structured as an episodic narrative, this 3D-film stems from the artist’s extensive field-research in the Amazon informed by science fiction, cultural ideas of taste, and the beliefs of indigenous Amazonians. Set in the rainforest and renegade laboratories, its narrative is told through a commercial flavorist who is on the hunt for a mythical orchid, which holds miraculous properties and resides in the jungles of the Amazon. By deploying both 3D video and 3D animation systems, the video takes reality as a matrix of perceived and so-called unique essences, which could enable the potential for bio-diverse intelligence sharing.

The artworks presented in this exhibition are explicitly contemporary: they result from all three women artists’ independent research in the Amazon. Not as a companion, say, to a male researcher, and neither as an emissary of an institution. Their mobility stands as a sign of class, gender, and intellectual emancipation, and the fostering of new imaginaries. Thanks to the histories experienced and the confidence gained through education, the three artists come to foster new imaginaries.

As a central component of this exhibition, a series of public programs will introduce the work by other artists who have also created work in the Amazon. In these programs, special attention is given to documentary practices, including a presentation on the work of Claudia Andujar by curator Agustin Pérez-Rubio, and a project on Thea Segall by the researchers Sagrario Berti and Aixa Sánchez.