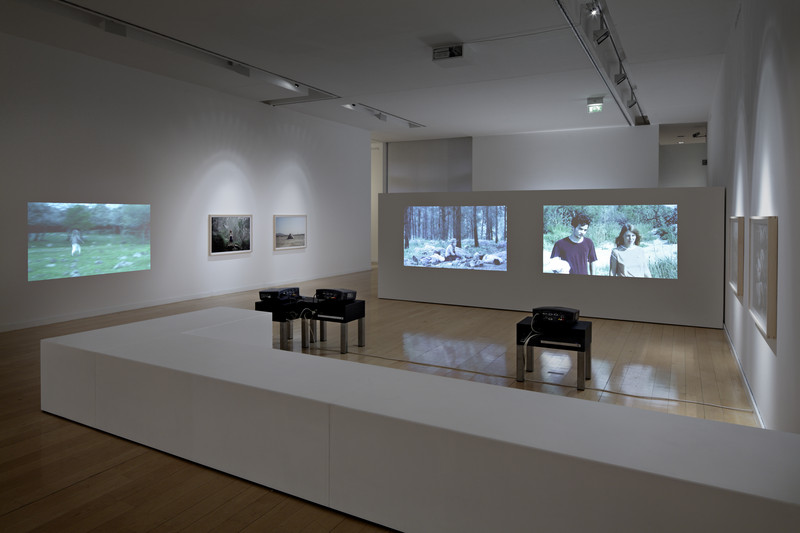 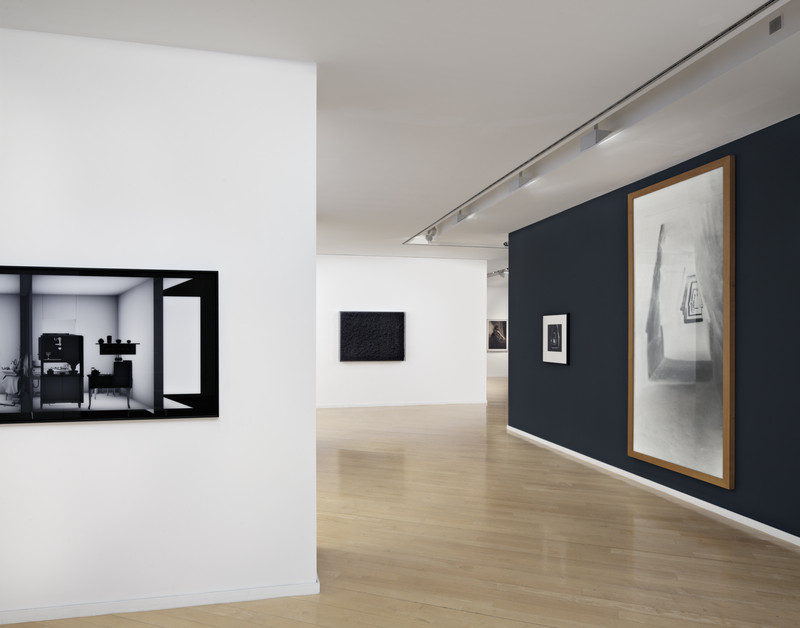 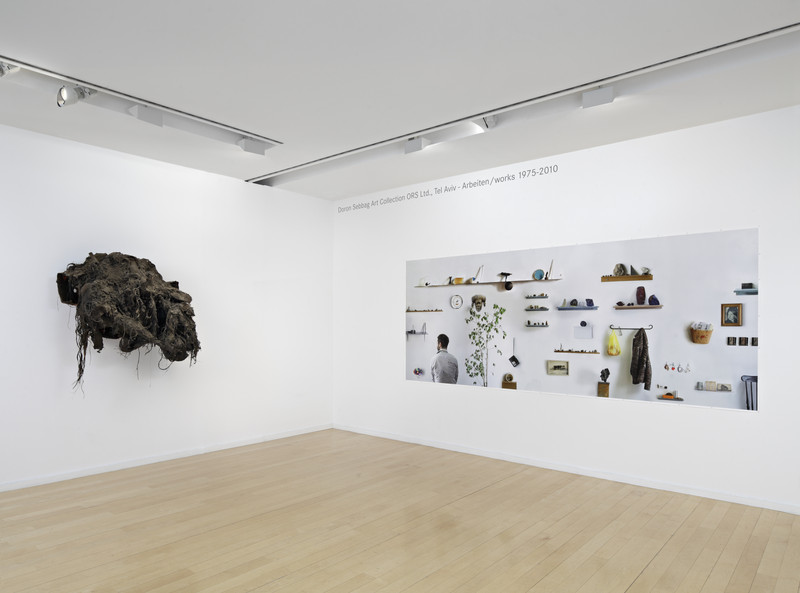 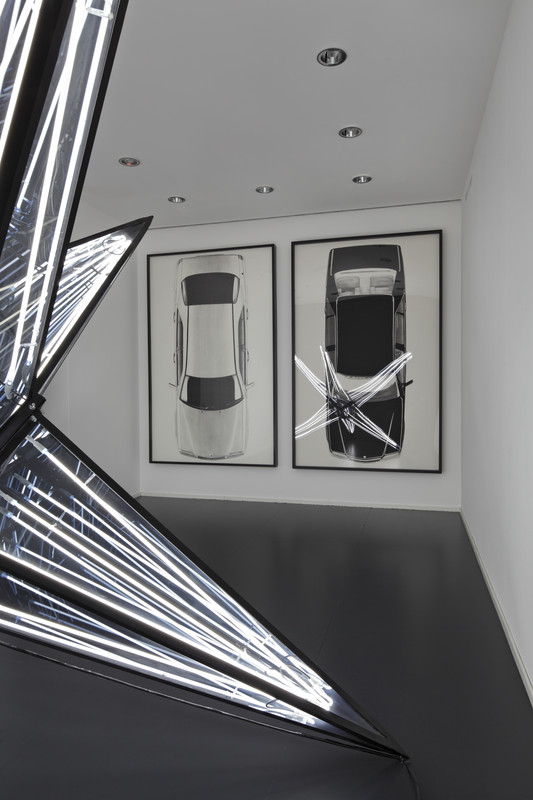 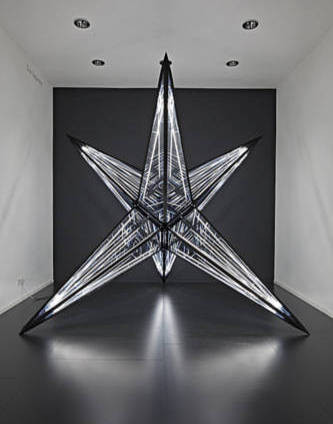 The exhibition series ‘Private/Corporate’ - a series of dialogues between the Daimler Art Collection and domestic German and international private collections that began in 2002 - has, over the course of ten years or so, taken us on something of a journey around the world: the collections of our guests and dialogue partners have taken us to New York (the Sonnabend Collection, 2003), Mumbai (the Poddar Collection, 2007), Buenos Aires (the Vergez Collection, 2011) - and, most recently, to Tel Aviv! These collections, and of course those of our German partners Paul Maenz (2002), Heliod Spiekermann (2005) and Björn Lafrenz (2008) also, have presented us and our exhibition visitors with a multi-faceted panorama of contemporary art from circa 1960 to the present day: since 2002, around 100 artists from approximately 20 countries have been guests at the Daimler Contemporary gallery at Potsdamer Platz.
The Maenz, Sonnabend and Lafrenz collections, with their emphasis on conceptual art and minimalism, had much in common with the Daimler Art Collection. Our cooperations with the predominantly expressive and figural Spiekermann, Poddar and Vergez collections were more heterogeneous, although on the other hand this presented an opportunity to rediscover rarely-exhibited aspects of our collection.

Certain fundamental concepts that transcend stylistic and media categories emerged as common factors in the selection of artworks for our collaboration with the Sebbag Collection: narrative and temporal factors, expressive physicality and fetishism, existential codes and a mythically charged pictorial quality. The seventh exhibition in the ‘Private/Corporate’ series focuses on contemporary tendencies in art, both within Israel and internationally. Sebbag’s high-calibre collection consists of over 1,000 works and presents a varied, critically committed spectrum of contemporary Israeli and international art. The selection of approximately 40 works by about 20 artists from the Sebbag Collection is entitled ‘Accelerating Toward Apocalypse’ (first shown at Givon Art Forum, Tel Aviv, April-June 2012). Curator Tal Yahas made her selection with an eye to manifestations of time in contemporary art: archaeology, archives, the wasting of time and the obsession of capturing the moment are the key elements she has woven together. The selection of about 20 artworks from the Daimler Art Collection by international and Israeli artists responds to this theme with artworks that bring together politico-social analysis, existential ciphers and gestures and aspects of animism and fetishism. The focus is on new acquisitions from the collection.

Doron Sebbag is a collector who is passionate to the point of obsession. Together with his wife, Adi Sebbag, who is a lawyer currently practicing in Tel Aviv, he is always on the trail of the latest developments in art. This open-minded and inquisitive investigation is primarily carried on through encounters and friendships with artists and through Sebbag’s diverseinvolvement in promoting Israel’s contemporary art and museum scene, and, of course, through visits to international exhibitions and art fairs. This, in turn, is part of his diverse spectrum of activities, which includes supporting individual artists, publishing catalogues and realising art projects. Two thematic exhibitions of artworks from the Sebbag Collection have previously appeared at Israeli museums, ‘Quotations in Art’ (1996) and ‘Portraiture’s Many Faces’ (1996), plus two extensive showings of new acquisitions at the Tel Aviv Museum of Art, ‘Exposure’ (2000) and ‘Depletion’ (2008), curated by the long-time curatorial advisor Aya Lurie (see also: text in this catalogue by Dana Golan Miller, the collector’s curator in recent years). Some of the artworks in the collection were acquired to be exhibited on loan at the Artplus Hotel, or commissioned for specific spaces or situations. The Artplus Hotel Tel Aviv is a joint initiative by the Sebbag family, ORS Ltd. and the Atlas Boutique Hotels hotel chain. Doron Sebbag is currently employed at O.R.S.-Overseas Representation Services Ltd. in the position of Chief Executive Officer, President, and Chairman. O.R.S. Ltd. is a human resource company that offers recruitment and management services, primarily in the medical, health and welfare services sectors.

The visitor’s path through the exhibition at the Daimler Contemporary will be laid out based on resonances between thematic blocs of artworks from both collections. The tour will open with a group of artworks from the Sebbag Collection - anchored, mentally and thematically, by Hermann Nitsch’s early picture Relikt der 50. Aktion (1975). Whereas Nitsch’s abstract blood trail on canvas speaks to the imagination of the viewer, the sculptures by Sigalit Landau (an apparently skinned figure suspended from the ceiling, constructed from fibreglass) and Peter Buggenhout are geared toward an almost shocking, unmediated sensory physical confrontation. In the case of a shape alluding to a Gorgon’s head of the latter sculpture, this shock factor extends to the language of the materials: ‘polyester, papier mâché, iron, wood, plastic, household dust, horsehair, and blood’. The archaic, ritual aspects of these three artworks will be echoed by Ilit Azoulay’s two intellectually choreographed memory spaces created by means of photography: the large-format photograph The Keys (2010, Sebbag Collection), which shows a computer-designed wall display of found everyday objects - conserved with great attention to detail - and Transition (2009, Daimler Art Collection), which consists of a number of photographic found objects showing various different stage set-like spaces, nested one inside the other.

The main room of the Daimler Contemporary will be given over to five video artworks by three female Israeli artists from both collections. All five share an extremely reduced, minimalist language that largely dispenses with dialogue, depending solely on the sensory power of concentrated, slow image sequences which are sometimes repeated in the manner of a ritual. Michal Rovner’s video Notes (2001, Sebbag Collection), a joint project with the composer Philip Glass, shows silhouette figures in heavy coats passing through an open landscape scene of alternately sandy and snowy desert plains. They are answered by some of the

Daimler Art Collection’s newly acquired video artworks by Sigalit Landau and Amit Berlowitz. The investigations into the existential qualities of borders and borderline situations - physical, geographical and psychological - that are reflected in Rovner’s work also appears in Landau’s video Mermaids (three naked women at the sea’s edge, who leave traces in the sand to the rhythm of the waves) and Berlowitz’ subtly related mini-dramas (a child playing hide-and-seek
all alone in the wood / a young couple on a beach, seeking themselves spiritually and yet becoming lost). The typology of landscape oscillating between reality and dreamlike scenarios is echoed by a video of Uri Nir with hugh soft bubbles ‘overshadowing’ a meadow.

A third bloc of artworks - which are primarily taken from the Daimler Art Collection - represent the concepts named at the outset: expressive physicality and fetishism, existential codes and a mythically charged pictorial quality. Robert Mapplethorpe presents the body of a man of colour in sections against a black background, seeking the point where beauty becomes horror, the balance between aesthetic refinement and aggressive photographic ‘processing’ of the photographic ‘object’. Michael Sayles draws African sculptures inspired by the deity statues of the Dogon ancestor cult of southern Mali with the care of an Old Master and fuses them with implements encountered in Berlin’s S&M scene. Robert Longo is another artist who has been known across the world since the 1980s thanks to his virtuoso black- and-white drawing technique: we have displayed his large-format drawings of Mercedes automobiles, shown in top view and hung on the walls like fetishes, opposite an aggressive sculptural star by Guy Zagursky that dominates the space. To create his wall object Unforgiving (2006, Sebbag Collection), Damien Hirst sealed thousands of flies under a layer of resin - visualising the “cycles of life and death, creation and destruction” (Tal Yahas) and, like Mapplethorpe, penetrating into the borderland between the aesthetic and the horrific. The artistic articulation of the fusion of different worlds, primitivism - in the form of referential reworkings of indigenous tribal art - and the deliberate fostering of the ambiguity that arises when the figural and the abstract meet - these are key themes for the artists named here, and also for the sculptures of the young Berlin artist Madeleine Boschan, which are going to be exhibited in dialogue with the works of Hirst and Mapplethorpe.

Strategies of ‘repetition and wasting of time, compositions resting on repetition and on the squandering of time as a compulsion or a closed loop, compulsive repetition and arresting of the moment’ – these are the themes that Tal Yahas will present, with a combination of poetry and compelling clarity, at the conclusion of our exhibition tour – bringing together works from the Sebbag Collection, in the form of representative groups of artworks by artists such as Nan Goldin, Wolfgang Tillmans and Dash Snow. Her text ‘Accelerating Toward Apocalypse: The Contemporary Art Collection in Present Continuous’, to be published in the accompanying catalogue, is a detailed and reflective summation of her thoughts on the subject.

We would like to thank Adi and Doron Sebbag, who responded to our idea of a shared exhibition with great enthusiasm and provided extensive support. Thanks to Dana Golan Miller who had a major part in the initial show and who has been taking care of the logistic part. Tal Yahas, with her exhibition of artworks from the Sebbag Collection ‘Accelerating’, has provided the thematic keynote for this ‘Private/Corporate VII’ show.