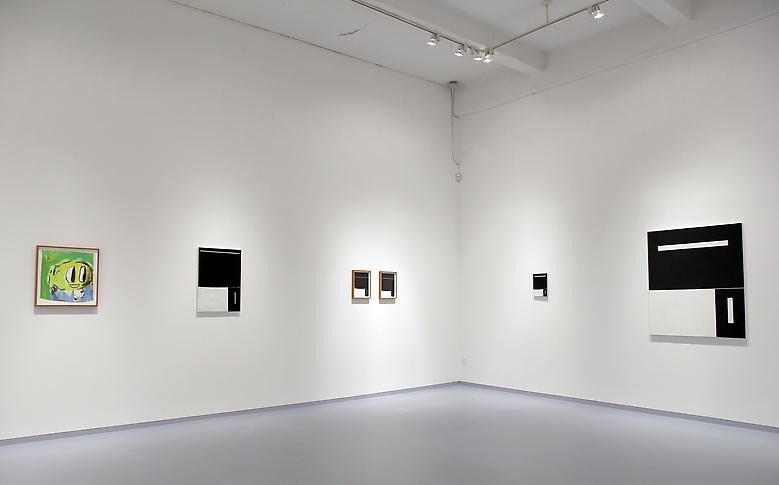 In his exhibition in Metro Pictures’ Upstairs Gallery André Butzer presents seven abstract paintings that are a continuation of his achromatic series of N-Bilder [N-Pictures]. The ostensibly geometric black-and-white paintings, like the grey fields of paint on canvas that preceded them, stand in visual opposition to the intensely colored, agitated, and cartoonish characters and houses that are closely identified with the artist. Within Butzer’s concept of the representation of painting, both the expressive chaos of his N-Haus paintings and the formally ordered N-Bilder, are aspects of a system Butzer has developed that is a kind of modernized, comic-book version of the Romantic German philosophical tradition. The mythology of “N” pervades the entirety of Butzer’s explicit engagement with painting. According to this system his minimalistic paintings are not reductive but rather the accretion of all possible elements to occupy his paintings.At first glance the N-Bilder appear to be straightforward geometric abstractions, but they are painted freehand and on closer inspection the lines and shapes are clearly irregular. The black and white areas subtly merge, with the foreground and background shifting not perceptually, but subjectively. The lines that define black from white in the works subtly rise and dip, giving a unique character to each of the referentially formal works. For Butzer, a confrontation of life and death is represented in the works by these long, white vertical (life) and horizontal (death) elements incorporated in each of the paintings. Exhibited along with the N-Bilder are two recent small color canvases of characters that Butzer cut out from a larger painting that he subsequently destroyed. “N” is at once a cemetery and birthplace for these and all of his figures, so, in this sense, these framed patches of canvas are both new and old.“N,” or NASAHEIM, is an unreachable, unimaginable coordinate Butzer named by combining NASA and Anaheim, home of Disneyland, that was named by the area’s original German settlers. “N” is the place where all colors are preserved and in the black and white paint of the N-Bilder one sees delicate, imperceptible shades of color.André Butzer has had one-person shows at Kestnergesellschaft, Hanover; Kunsthistorisches Museum CAC Contemporary Art Club at Theseustempel, Vienna; Kunsthalle Nuremberg and Kunstverein Heilbronn. His work has been included in group exhibitions at Museum of Contemporary Art, Los Angeles; Kunstmuseum St.Gallen; MUMOK, Vienna; ZKM Museum für Kunst und Medientechnologie, Karlsruhe, Germany; the Rubell Family Collection, Miami; Goetz Collection, Munich; Musée d’art contemporain de Nîmes, France; Kunsthalle Hamburg; Kunstverein Graz; Kunstverein Frankfurt and Kunsthalle Baden-Baden.
www.metropicturesgallery.com