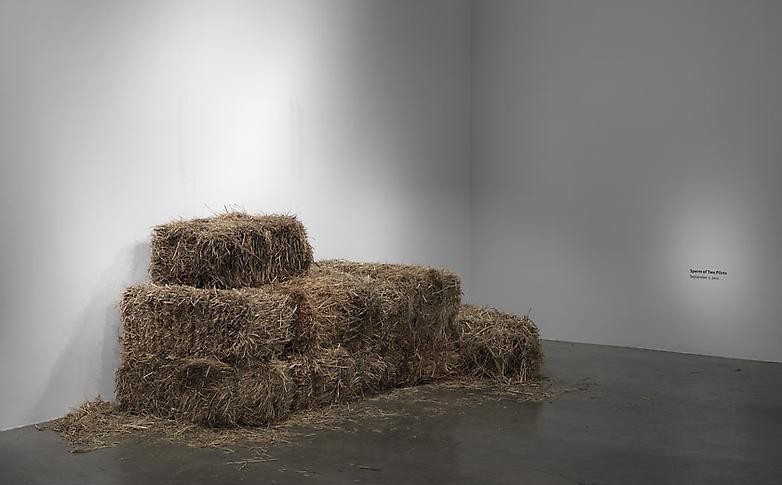 Andreas Slominski's “Sperm” comprises the semen of humans and animals splashed on the walls and floors of Metro Pictures. The theme of the exhibition is that of touch, specifically the moment sperm fuses with the ovum and fertilization occurs. As the foundation of existence, Slominski identifies touch as one of the most important forces in our world. “Sperm” represents both a shift in focus and continuation of Slominski’s engagement with this notion of the instant of contact, which has been a key element in the traps that have been a signature aspect of his work for more than 25 years. The elaborate though hidden processes that go into Slominski’s exhibitions and works have long been a poetic and brutal crux of his practice, whether having a giraffe lick a stamp or, in the case of “Sperm,” evidence of a complex, clandestine operation to get pilots’ sperm unexpectedly high on the gallery’s walls. In contrast to passive, static sculpture, Slominki’s traps teem with latent energy. Once touched, that energy is released to make the traps explosive, active objects. “Sperm” disrupts codified notions of sculpture in a way similar to Slominski’s traps, but where the traps replace marble or plaster as material, “Sperm” eliminates the tangible object completely. Additionally, in using sperm Slominski acknowledges the burgeoning ubiquity of imaged semen—a new development in the history of images, which only first appeared in so-called adult films in the 1970’s but has proliferated since the onset of the internet. “Sperm” is Slominski’s laconic elaboration on this expanded field.Andreas Slominski’s one-person exhibition “Walls” is on view through October 1 at Villa Schöningen, Potsdam, Germany. Other one-person shows include: Museum für Moderne Kunst, Frankfurt; Serpentine Gallery, London; Fondazione Prada, Milan; Museum Boijmans van Beuningin, Rotterdam; Deutsche Guggenheim Berlin; and Kunsthalle Zürich, Zurich. His work has been included in group shows at Museum Ludwig, Cologne; Witte de With Center for Contemporary Art, Rotterdam; CCA Wattis Institute for Contemporary Art, San Francisco; and Astrup Fearnley Museet, Oslo. He participated in the 2003, 1997 and 1988 Venice Biennales.
www.metropicturesgallery.com